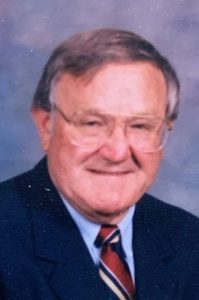 John Henry Lukac, 89, beloved husband, father, grandfather, brother and uncle passed away Thursday, Feb. 18, at his Catawba Island home surrounded by his family. He was born June 1, 1931 in Port Clinton, the son of Joseph and Mary Lukac. John graduated from Port Clinton High School in 1950. He married Nancy (Stallkamp) Mueller on May 23, 1987 and she survives. John began working at Erie Army Depot and retired from Lewis Research Center, NASA where he was the Chief of Equipment & Supply in the Logistic Division and also the Property Disposal Officer. After retiring from NASA he worked for the Ottawa County Auditor in Weights and Measurements retiring in 2006. He was a member of Immaculate Conception Catholic Church, Port Clinton, Knights of Columbus, Port Clinton Elks Lodge No. 1718, Port Clinton Athletic Boosters and a former member of Fremont Country Club and Catawba Island Club. He loved spending time with his family and following his grandkid’s sporting events. He was an avid Notre Dame Fan and loved to golf. John’s family would like to give a special thank you to their neighbor and friend, Jim Faris, for his help and support, and Stein Hospice for the loving care of John.

Margaret Snow of Port Clinton, Helen Ahrens of Moline, Ill. and many nieces and nephews. He was preceded in death by his brother: Joe Lukac; sisters Mary Yeager and Ann Warner.