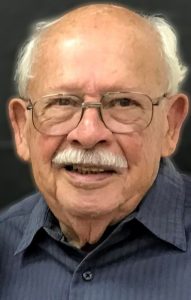 He was preceded in death by his parents, John and Myra Pugh; his son-in-law, Donald Ray Hinckley; and his great granddaughter, Myrlis Hinckley.

He was a graduate of West High School in Columbus, (Class of 1948) and attended the Ohio State University. He was a veteran of the Korean War. He served honorably as a parachute rigger in the U.S. Navy from 1950-54, achieving rank as Petty Officer Third Class.

After his military service, he worked as a plumbing contractor for several years before starting his own business, Pugh Plumbing Company, and worked there until his retirement in 1993.

He was a member of the American Legion, the Luther B. Turner Masonic Lodge, and Firelands Presbyterian Church. In his spare time, he enjoyed hunting, fishing, carpentry, and spending time with his family.

Memorial services will be held at 1 p.m. Fri., Dec. 10 at Firelands Presbyterian Church, 2626 E. Harbor Rd., Port Clinton, OH 43452, with the Rev. Bob Butcher officiating. Masks must be worn by those in attendance. Burial will take place at Greenlawn Cemetery, Wapakoneta, at a later date.

In lieu of flowers, memorial donations may be made in his honor to Firelands Presbyterian Church or a charity of your choice.

Miller Funeral Home, 1605 Celina Road, Saint Marys, is entrusted with Mr. Pugh’s funeral arrangements and condolences may be sent to his family via Millerfuneralhomes.net.