John Schaffner returns to the mic in “Broadway’s My Beat”

More than 2,300 people listened to the live stream of “Broadway’s My Beat” on Port Clinton Radio.

For a couple of hours, it was 1950 in Port Clinton again. 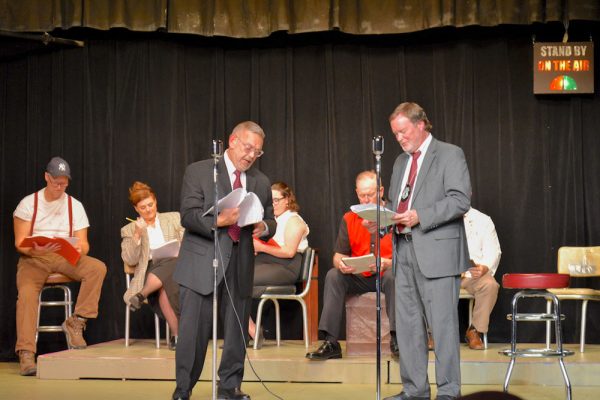 Beacon Publisher John Schaffner, who has an extensive background in radio, stepped behind the microphone once again to portray the “Announcer” for “Broadway’s My Beat.” Schaffner formerly served as play-by-play announcer for Bowling Green University football and worked as news director, sports director and announcer for various radio stations, including WRWR, where he hosted the daily program “Sound Off.”

Beacon fans will recognize the name, which also titles the paper’s Letters to the Editor column.

Although he has been away from the stage for quite some time, Schaffner has considerable experience in community theater, having performed at Playmakers Civic Theatre in popular plays like “South Pacific” and “The Sound of Music.”

“I always played the role of the antagonist. I was the comic relief,” Schaffner said, with his trademark smile.

But during the “Broadway’s My Beat” performance, Schaffner revised his real-life role as a radio announcer, narrating the script and its commercials in his booming, seasoned radio voice. The commercials, which highlighted modern-day businesses in retro style, were one of the highlights of the show. 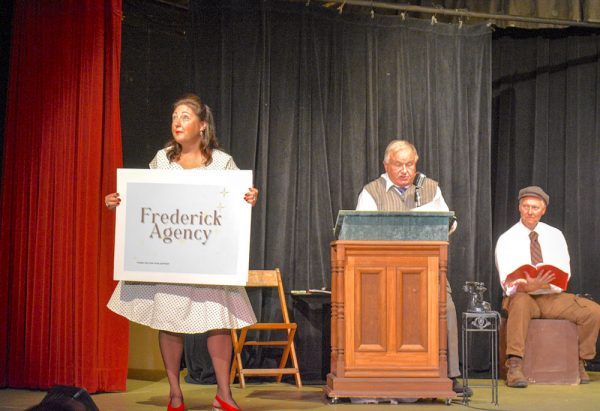 Caroline Gatsch, the “Card Girl,” carries an ad card across the stage as John Schaffner, the “Announcer,” talks about Frederick Agency during a commercial segment of “Broadway’s My Beat.” Looking on is Pete Johnson, who portrayed Quantrill and Mr. Hanson.

Schaffner was impressed with the script he helped bring to life.

“The detective’s monologues are beautifully written. They had to do a lot of imagery in radio to create voice pictures,” he said.

While Schaffner was revising an old role as a radio announcer, Stacy Maple was stepping into a new one in her first-ever experience as a producer. 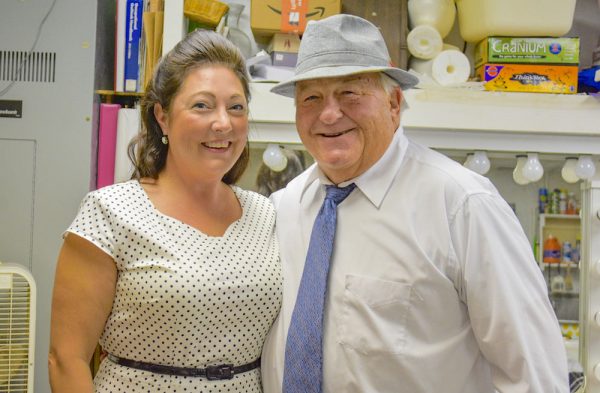 Caroline Gatch and John Schaffner pause a moment backstage before the Oct. 19 performance of “Broadway’s My Beat” at Playmakers Civic Theatre.

“Doing a live murder mystery was a new concept for the theater, the cast, the director and the community. I think it went great, and another one is in the works,” Maple said. “Last I heard, we had 2,379 people listening online from all over the country.”

Maple did a tremendous job bringing the vintage radio show to life. For some people in the theater audience, “Broadway’s My Beat” created their first experience with live radio. For others, like Delores Cantu of Port Clinton, Maple’s production brought them back to a simpler era when radio dramas were an exciting form of entertainment.

“I’m old enough to have listened to radio shows like ‘The Shadow Knows,’” she said.

“Broadway’s My Beat” carried Cantu back to her childhood and the pleasant hours she spent entertained by her family’s radio. As she watched the performance, she remembered the excitement of dramatic music and realistic sound effects that helped her visualize the scenes of the show.

“I was closing my eyes, trying to get the feel of it again. I listened to the sounds of the footsteps and the doors creaking,” Cantu said. “It had the same feel. It was really good. It brought back memories of when I was a kid, listening with my mom.”

“Broadway’s My Beat” served as a fundraiser for PCT and GPCAAC and a kickoff for this year’s theater season. Season tickets are now available for the theater’s upcoming performances: “Rented Christmas” in December, “Barefoot in the Park” in March, and “When Did You Last See Your Trousers?” in July. For more information, visit www.pcplaymakers.org.