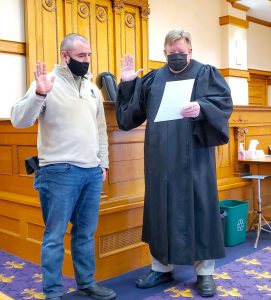 Michael Rohde, an infantryman in the U.S. Army from 2001-04, was recently reappointed as a Member-at-Large on the Ottawa County Veterans Service Commission’s Board of Commissioners by Judge Bruce Winters of the Ottawa County Common Pleas Court. Rohde was previously appointed to fill a remaining one-year term.

During Rohde’s one-year term on the Board, he was instrumental in approving nearly $75,000 in emergency financial assistance to the veterans of Ottawa County, as well as their family members. As a strong advocate of veterans, he has been actively involved in the celebration of the accomplishments of county veterans, and in the commemoration of their sacrifices.

Rohde is an OEF/OIF veteran having served on active duty in the U.S. Army from 2001 to 2004 as an Infantryman. Rohde has also served as Senior Vice and Quartermaster of Veterans of Foreign Wars (VFW) Post 8732 and is a member of American Legion Post 114.