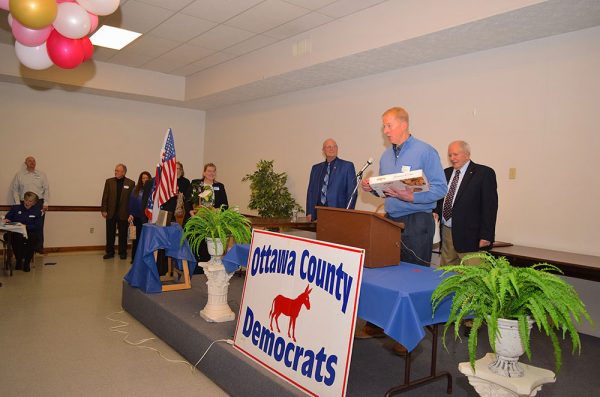 Ottawa County Commissioner candidate Gary Quisno leads a parade of county candidates to the stage to hand out raffle prizes at the the Blue Plate dinner at the Oak Harbor VFW Post 8732 last Thursday evening.

O’Donnell, a Cuyahoga County Common Pleas Court judge, is a constitutional scholar who is worried that politics are deciding issues rather than the judges who have a constitutional role of serving as the checks and balances for the other branches of government.

“Our laws must be constitutional, but the present administration encourages appointing judges that follow its agenda, not the law,” said O’Donnell. “Voters must not be told they’re getting judges who will rule the way their party wants them to vote.

“Whether you like a piece of legislation or a policy, if it is not constitutional, it doesn’t matter whether I or my colleagues on the bench are Democrats or Republicans. We have to perform our function. These days, the independence of the court is getting lost.” 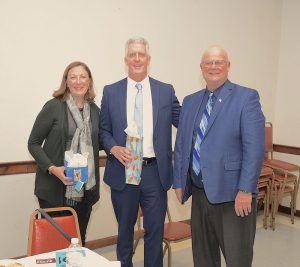 Judge Brunner, who serves as one of eight state appeals court judges of the Tenth District Court of Appeals in Franklin County, says the gerrymandering of legislative districts as her most important issue.

The U.S. Supreme Court has ruled that leveling the playing field and eliminating gerrymandering issues in Ohio does not belong in federal court, but rather the state courts.

“Ohio is an extremely diverse state and gerrymandering has not served it well,” said Brunner. “Judgeships, districts for court of appeals, county common pleas courts and the judiciary’s role in reviewing district lines may now be based on challenges coming before the Ohio Supreme Court,” said Brunner.

Brunner has a diverse background, serving as a common pleas court judge, and Ohio Secretary of State. In 2008, Brunner received the bipartisan John F. Kennedy Profile in Courage Award for public service, and has practiced law for 17 years. Brunner helped fight corruption in the Republic of Serbia, was an election observer in Egypt and provided legal training in Sri Lanka.

“My strong suit is the wide range of my experiences,” she said. “I’ve worked in all three branches of government, managed a statewide law office, was a trial judge and court of appeals judge. I’m ready for the Ohio Supreme Court.”