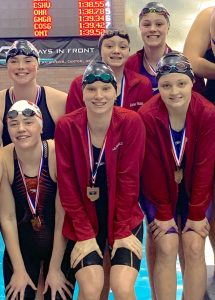 Periat nearly won the state championship in the 50 freestyle, finishing in 23.68 seconds, just 0.44 behind Shaker Heights Hathaway Brown’s Taplin Seelbach. Periat also finished 11th in the 100 butterfly in 57.64 and was part of two relay teams that finished in the top 10. (Periat finished 10th in the 50 free and the 100 fly last year.)

The 200 medley relay team of Periat, Gabbi Porter, Alexa Taylor and Carlie Blaesing finished eighth in 1:49.01, good enough to reach the podium, and the 200 free relay team of the same quartet took 10th in 1:39.86.

And Brigitte Schroeder had a great showing in the diving competition, finishing eighth with 380.65 points. (She was 12th in Div. II last year.)

“Any time you can finish this high, especially at the state meet, it’s a great thing,” said Port Clinton coach Danny Diaz. “We came in 13th, and I think we were fifth out of the public schools, so I’m very happy with that.”

Diaz praised Periat, who is just a sophomore, and the relay teams.

“She had an okay day on Thursday, but after her nerves calmed down, she said, ‘Let’s swim and see the best we can do.’ For someone that’s so young, she exceeded my expectations,” Diaz said. “That’s super exciting because on Thursday, you’ve got to swim fast to make it to the podium. When we saw we had an opportunity to get to the podium, everything worked out for us.”

It was the final meet for a number of seniors, namely Porter.

“We’re losing some seniors. Gabbi Porter was an integral part of the medley relay, and Davie Avis — those are our two major contributors that are graduating,” said Diaz. “But everyone else comes back, so it’s pretty exciting.”

“Logan was able to finish in the top-16 in his individual events and had a great showing in his final meet,” said Diaz.

The Rockets, led by Skyler Turner and Alyse Sorg, also had a successful showing, too.

“We’ve expected big things out of the two of them all season long. Neither one of them swam their individual races very much at all during the season because they can do any event and do quite well. We wanted to put them in places so we could score the most points. The two of them were very selfless throughout the season,” said Andrea Sorg. “When it came down to choosing events, we thought about choosing where we could score highest. This weekend, they both performed well. Skyler swam out of her mind in the 100 breaststroke and fought her way onto the podium.”

“They did really well. We started out the season with some goals of getting all three relays to state. How that looks and what kind of sacrifices that might mean to get three relays to state — the girls were about it and committed to it,” said Sorg. “They all did quite well, the third relay didn’t score quite as high, but those girls swam personal bests (lifetime bests for all four of them). It was neat to see them come together and have it come to fruition.”

It was the final meet for Mizelle and Sydney Overmyer, who was part of the 400 free relay team that qualified for state.

“Amelia has been a part of the program since she was an 8 & Under swimmer. She was a summer swimmer, and concentrated more on running than swimming, but as she got older, she was in the pool more. She was a four-time state qualifier, and got better each year as she swam,” said Sorg. “Sydney has been a strong swimmer all along. The past three years prior to this year, she was getting to districts, I think she got that far every year. She knew that if everybody stepped up, she could be as good, if not better. She elevated herself and put herself in position to be in a state-qualifying relay.”

Oak Harbor will return a number of young, capable swimmers for next season.

“Right now, I think we’re sitting in a good spot,” said Sorg. “Out of 7-8 sophomores, I think only one did not make it to districts. All of those girls have been in the program for some time.”