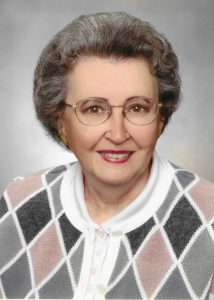 Katharyne “Katie” Joreski-Chafee, age 94, resident of Port Clinton, passed away Jan. 5 at Otterbein Nursing Home in Marblehead. Katie was born on May 23, 1926, in Columbus to the late Sterling C. and Kathryn M. (Vance) Moon.

After high school, Katie went to Ohio State University to continue her education, where she received a Master’s in Education and Administration. With her love and passion for teaching, she had worked as an Elementary Teacher for 15 years and then another 15 years as an Elementary Principal in the Columbus, Ohio where she had retired. During her retirement, Katie worked as Treasurer at Trinity Methodist Church in Port Clinton for 14 years, where she was an active member.

A true socialite, she was in many organizations; a few of them being, Eastern Star over 50 years, Port Clinton Yacht Club for over 50 years, Playmakers, Red Hats Society, State Teachers Retirement and numerous book clubs and bible studies.

Katie enjoyed crafts; she like going to the Toledo Museum monthly for their workshops. Living by the lake for over 40 years, she loved going out on Lake Erie, especially on her boat, “Katie Did”. Katie will truly be missed by all who knew her.

The family ask’s that in lieu of flowers, memorial contributions be made to Ottawa County Humane Society, 2424 E. Sand Road, Port Clinton, Ohio 43452.

A memorial service will be conducted in early summer of 2021. The Gerner-Wolf-Walker Funeral Home and Crematory, 216 Washington Street, Port Clinton, assisted the family with arrangements.