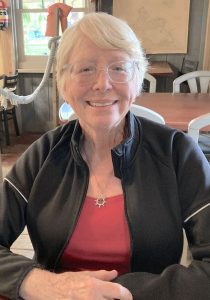 Port Clinton native Kathie A. Holbrook has been named to the Board of Directors of the Catawba Island Historical Society. Her term will run through Dec. 31, 2023.

Kathie and her husband, Charlie, grew up in Port Clinton. Their jobs, however, took them to other locales such as Texas, Illinois, and the Washington D.C area, but their roots and allegiance never left Ottawa County.

The Holbrooks began spending 6 months a year on Catawba in 2009 and moved to the Island’s Cliffs neighborhood full time in 2021.

Holbrook holds BS and MS degrees in Natural Resources from The Ohio State University. She went on to become an educator who taught biology, physics, swimming and first aid to students from grade school through university.

Her background in community service and activities is extensive. She was a former Director of the American Cancer Society, spent 40 years as a Red Cross Instructor and Trainer, and is a retired National Park Service Ranger.

“We lived for a number of years near the Nation’s Capitol,” said Holbrook. “That’s when I developed a passionate interest in U.S. Civil War history. Carrying that forward to include studying and preserving the heritage of Catawba Island is an easy and exciting transition for me.”

Holbrook’s first project as a board member will be helping to organize a reception at the Historical Society’s Union Chapel Museum for the Catawba Cliffs neighborhood, which this year is celebrating the 100th anniversary of its founding. Cliffs residents will have an opportunity to see the Museum’s unique exhibit about J.H. Bellows, whose vision as developer of the Cliffs evolved into one of the Island’s most scenic communities, and gave birth to what is today the Catawba Island Club.

President Craig Koerpel of the Catawba Island Historical Society, said that “Kathie’s energy and creativity are exactly suited to introducing others to the benefits Union Chapel Museum has to offer. And her training as a teacher will unquestionably help us advance our goal of using the lessons of history to inspire and create perspective.”