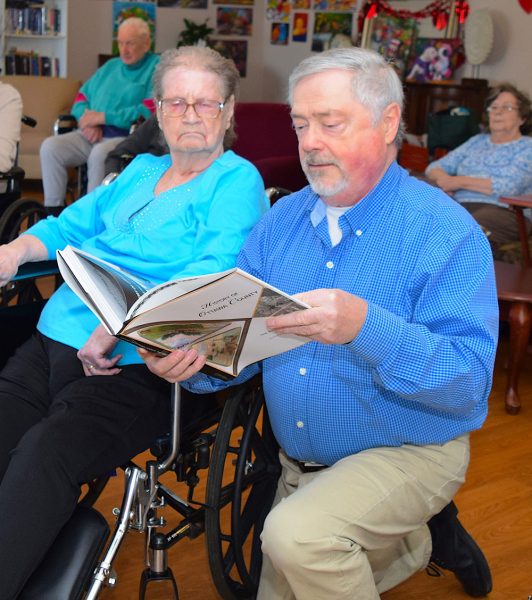 As a present on her 83rd birthday, Kay Dulaney was presented a copy of History of Ottawa County, the 1st 175 years by the Ottawa County Historical Society and the book’s author, Patrick Lawrence O’Keeffe. (Photo by D’Arcy Egan)

Kay Dulaney seemed a bit surprised. On a recent sunny Friday afternoon, a number of her neighbors at Edgewood Manor on Fulton Street in Port Clinton gathered around her in the common room to celebrate her 83rd birthday. Nothing unusual about that.

But then, the Ottawa County Historical Society presented Kay with a birthday gift, her own copy of its recent publication, History of Ottawa County, the 1st 175 Years.

Her face lit up when she realized that the festivities would include a presentation by the Society on the history of the Wolcott Keeper’s House on Bayshore Road in Danbury.

“That was once my home,” she said, just above a whisper.

And indeed it was. Kay’s daughter, Deb Jeneary, had alerted the Society to the fact that her mother had lived in the house as a little girl when her name was Kay Sedlak. In honor of her birthday, she was front and center as part of an attentive audience of Edgewood Manor residents to which the Society presented a thorough history of the iconic house. The program covered the period of time from when Connecticut Land Company surveyors first visited the Danbury Peninsula in 1806 up to a recent renovation and restoration.

The Wolcott Keeper’s House, built in 1822, is the oldest house in Ottawa County, second in age only to the county’s longest standing structure built in 1821, the Marblehead Lighthouse, or what was originally known as the “Sandusky Light.” Both were built by William Kelly, a Sandusky mason.

Its place in history had been all but forgotten by the early 1940s when Kay’s parents rented it as their family home. Prior to that, in the 1930s, it had been converted into a chicken restaurant to take advantage of the flow of traffic now able to cross the Sandusky Bay thanks to the new automobile bridge connecting Sandusky and Danbury. 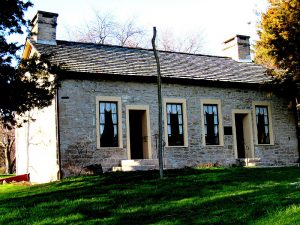 When Kay Dulaney and her family lived in the historic Wolcott Keeper’s House building in the 1940s, the top photo was much like the house appeared at the time. After being restored to its original appearance by the Ottawa County Historical Society, the house (bottom photo) is a popular historic site featured at the Marblehead Lighthouse Festival. (Photos courtesy of the Ottawa County Historical Society)

Just how has Kay’s childhood home, a good two miles from the lighthouse, acquired historical significance? It appears to be just a farmhouse, albeit a somewhat fancy one for the times, a stone replacement of the log home built earlier by Benajah Wolcott for his family. Wolcott had been a member of the original survey team from Connecticut.

In the days of the Sandusky Light’s construction, the area was sparsely populated. President James Monroe looked for the nearest resident who was also a veteran to appoint as its keeper. Benajah, who had served in the War for Independence under General Washington from the age of 14 to its conclusion, fit the bill. He was hired as the keeper, a position he served from 1821 until his death in 1832 from cholera. His widow Rachel then assumed his duties, the first female lighthouse keeper on the Great Lakes.

A childhood home with so much history attached to it—so, what is Kay’s most impressive memory of having lived there? “Oh, that would be when my baby brother was born,” she said with a smile.