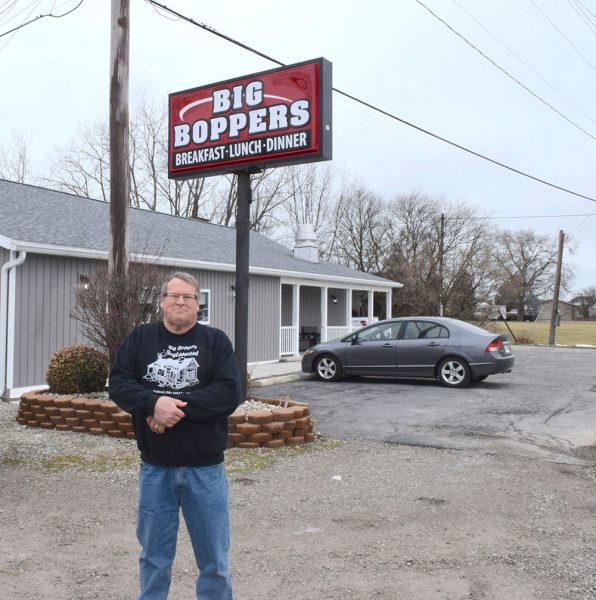 Ken Kostal is now known by the moniker Big Bopper, a tag his father wore for many years.

The Big Boppers restaurant on the Marblehead Peninsula is your typical small town diner. It provides locals and visiting tourists and fishermen plenty of good food at a fair price and offers friendly servers and comfortable surroundings.

Big Boppers has become popular over the years as a place to enjoy a quiet meal with friends and family, or a hearty breakfast to fuel a day of the fantastic Lake Erie fishing for walleye, yellow perch and smallmouth bass.

Owners Ken and Diane Kostal plan to keep it that way, investing in a recent face-lift inside and out at Big Boppers, 7581 East Harbor Rd., Marblehead. They have no plans to retire.

Kostal’s route to the restaurant business was roundabout.

“From the age of 14 until I was 22, I worked Richfield Coliseum events at a food concession in the parking lot. When the concession owner bought three Chuck E. Cheese franchises, I started working as a manager of one of the stores,” said Kostal. “Being in the restaurant business just kind of happened.”

The Kostals moved to the Marblehead area in 1985, purchasing the present location.

“It was vacant, and we gutted it.” said Kostal.

It has been 35 years, and the restaurant is still going strong. Recent upgrades include a new roof, water heater, furnace, and electrical. The bathrooms and front entrance are handicap approved.

Kostal and 20 employees have one goal. To serve a quality product to a loyal clientele.

“When the fishing season is in full swing, we open for breakfast at 4:30 a.m.,” he said. “That’s when our customers want to eat.”

Big Boppers serves breakfast all day, and the menu ranges from simple bacon and eggs to three-egg omelets like the Popeye, combining spinach, bacon and Swiss cheese. The breakfast skillets are big enough for sharing. The Kielbasa skillet is loaded with potato, kielbasa, fire roasted veggies, and topped with cheddar cheese. Lunch is the usual fare of hamburgers, BLT’s, and patty melts, with the occasional surprise like the Chicken Cordon Bleu sandwich.

Dinner features BBQ ribs, chicken and, of course, fresh yellow perch and walleye. Soups are another specialty. The one disappointment, at least to this reporter, is liver in no longer featured on the regular menu.

“We still serve it as an occasional special. If you ask, we will serve it if we have it.” said Kostal.

Big Boppers is best known for is its chili.

Kostal traveled the chili cook-off circuit for over 20 years, winning the Best Chili in West Virginia title in 1990. He has also won titles for Best Salsa in Michigan, Illinois, and Nevada. He has been a judge for the world chili cook-offs.

“I don’t compete much anymore, but I still judge on occasion,” said Kostal, whose chili omelet laced with jalapeños has long been a fisherman’s favorite.

Kostal was asked about the name for the restaurant.