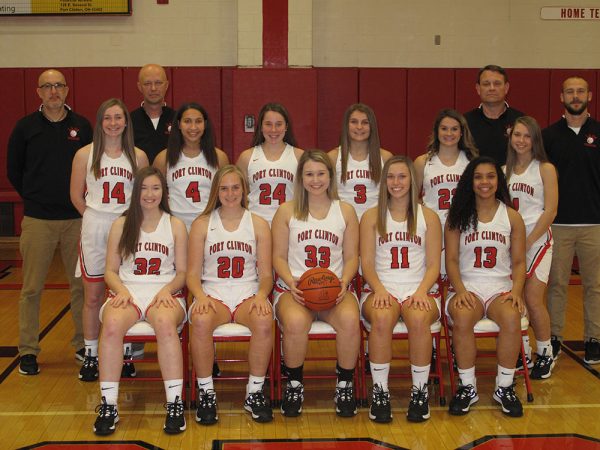 Forecast: Port Clinton has a new coach in Lucas Kennedy, and with it comes the promise of a new beginning. Former coach Toby Bickel’s teams were normally among the best in the Sandusky Bay Conference, but the Redskins have fallen on hard times recently and struggled to win, finishing 1-22 record last year.

Two of the top players returning from last year’s squad are Carli Laurel (7.9 ppg, 3.4 rpg) and Olivia Jackson (5.7 ppg, 3.0 rpg), and there are five seniors on the team, including Grace Heilman, Marie Gluth, Olivia Carnicom and Kathleen Smith.

The bench is a little thin, and a number of underclassmen will be counted on to play key roles. The primary reserves will be Smith, Marcella Brenner, Claudia Gillum, Kennedy Adkins and Brooke and Mackenzie Martinez and Brianna Rose. Chloe Klein could also see time, too.

“Being limited at the varsity level is a concern,” said Kennedy, an assistant for the last two years under Bickel. “We have hard-working freshmen and sophomores that understand their roles and are ready to give their all when their number is called.”

The Redskins will employ a motion offense with continuity that uses ball screens and allows players the freedom to make reads.

“We run a ball-screen centric offense. We utilize space and ball screens to try to create advantages for our players. (It’s about) being athletic and taking advantage of opportunities,” said Kennedy, who teaches and coaches football and baseball. “We want to speed up the game and get into transition.”

Defensively, Port Clinton will employ both man-to-man principles and play zone, too.

“We’re primarily man-to-man, but we’ll play some zone. We are predominantly a man-defense team,” said Kennedy. “We will mix in different looks throughout the game to give a different look for offenses (we’re facing).”

Kennedy talked about what he learned from Bickel, who led the program to new heights over his 15 years, including its only SBC title.

“It was great to be able to coach with Toby for two years. He was constantly talking to me about the little details of being a head coach. Even now, being able to walk down the hall and talk to him is a huge help,” Kennedy said. “I’m sure Toby still feels like a head coach in some ways with as many times I’ve been down there and all the questions he’s answered for me.”

In the preseason poll, Port Clinton was picked to finish last in the Sandusky Bay Conference’s Bay Division.

Kennedy talked about what he hopes to see out of his team.

“The girls have continued to show improvement from the first scrimmage to the last. Our expectations as a team is that we will get better every day,” he said. “There is still a lot of work to do with building technique and decision making within our offensive and defensive schemes.”