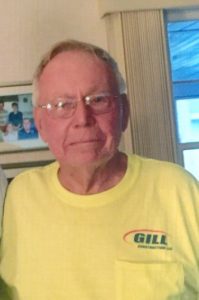 Kenneth “Ken” L. Gill, 80, of Port Clinton, passed away Wednesday, June 22, at Otterbein Marblehead Senior Life. He was born on Aug. 29, 1941, in Fremont, to Carl R. and Virginia R. (Nickel) Gill. On Oct. 1, 1976, in Port Clinton, he married Geraldine “Gerri” Phillips, and she survives. Ken attended Clyde Schools through his Junior year. He started working for his dad who owned C.R. Gill Construction in Clyde, at age 14 doing mechanical work and helping dig basements. At age 16, he worked after school for Norm Thayer at his gas station and also continued to work for his dad. During the winter, he worked for Glenn Thayer Chevrolet Dealership, also in Clyde.

In 1961, he began to work for Ed Williams where he was employed for a time after which he became employed by McCullough Construction. He was an equipment operator for both companies. He also worked for Don Beckman Builders as a carpenter. In 1965, he founded Ken Gill Construction which he operated for 38 years until retiring in 2003. His son, Dave, bought the company and owned it for the next 10 years. The business is still ongoing in the same location and owned by Ray Brooks.

Ken is a former longtime member of the Elks Lodge in Port Clinton. He enjoyed woodworking, boating, camping, and wintering in Florida.

Visitation for Ken was held Sunday, June 26, at the Gerner-Wolf-Walker Funeral Home & Crematory, 216 Washington St., Port Clinton, where funeral services were conducted Monday, June 27, by Father John Missler. The family encouraged everyone to please dress casually and wear your favorite Ken Gill Construction shirt or hat if you have one. Burial followed the services in Riverview Cemetery, Port Clinton. Memorial contributions may be given to Stein Hospice, Sandusky and to the Port Clinton EMS, 1755 E. State Street, Port Clinton, Ohio 43452.

Ken’s family wishes to extend a big thank you of appreciation to both Otterbein Marblehead Senior Life and Stein Hospice for all of their care and compassion for Ken.