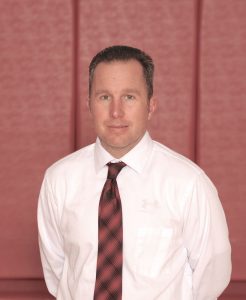 For more than 10 years, he has worked as an assistant with the Redskins boys basketball program, coaching under Ryan Hicks, Troy Diels and Gregg Hedden.

Now Belden is getting the opportunity to oversee his own program after being named the head coach of the Port Clinton girls basketball program last week.

“I found out on Thursday after school,” Belden said when he was told that he officially got the job. “I knew former coach Lucas (Kennedy) was getting ready to resign. He was looking at moving on in a different direction in life. I’ve worked with the youth girls program, and he asked me if I would be interested if he resigned.”

The Redskins went 6-15 last year, but it was a marked improvement from the season before as the team made strides.

“First and foremost, coaching your own team is great. Taking over the girls program, especially at the high school level, you look at the talent you have and go from there, as it could change year to year,” said Belden. “Da’Cariya Lanier is coming back. We’ll have an offense generated around her skill set, an up-tempo type game. She’s only going to be a sophomore.

“Brooke Martinez, Kennedy Adkins and Marcella Brenner will be seniors. Taylor Bollinger and Claudia Gillum will be juniors. I’m excited to see their growth as they become upperclassmen.

“I think, if you look at the program, this past year, I think they went up four total wins, which means it’s headed in the right direction,” he said. “This staff definitely got improvement from such a young team, and I commend the coaching staff and the girls. We want to get in the gym and work harder and hopefully get into double-digit wins and continue building this program.”

Athletic director Rick Dominick said Belden was a good fit for the program.

“He has over 10 years of experience as our JV boys coach,” said Dominick. “Coach Belden has demonstrated he is prepared to head our girls program. He connects very well with his athletes and has excellent game management skills.”

Belden is still in the process of interviewing potential assistants.

He credits coaches Hicks, Diels and Hedden for leading by example when overseeing a program.

“I coached under Gregg Hedden in my first year as an assistant. He was my coach, too, when I played. His knowledge of the game is amazing.

“He taught me so much about the game. Troy Diels’ skill development, game preparation and organization was so impressive, as was his reliability to the kids. When Coach Hicks asked me to come back into the program, it was surreal. His basketball I.Q. is amazing. I learned so much from him that I’m going to bring to the team.”

The highlight of his coaching career came in 2010 when the Redskins nearly won the Division II state championship, losing in the title game to perennial powerhouse Dayton Dunbar, 64-50.

Belden, who is going to continue coaching the boys golf team in the fall, was a standout basketball player who was the captain of his team during his senior season and won the Tom Bodager Award, named for the legendary Redskins coach, as the team’s MVP.

Belden still holds the record in a single season for most 3-point field goals with 73. An 2000 graduate of Port Clinton, Belden earned his bachelor’s degree from Ohio Northern University and teaches fourth grade at Bataan Elementary School.

He comes from an athletic family. His brother, Tim, who graduated one year after Kevin, is in the Port Clinton Athletic Hall of Fame for his efforts as a golfer. Tim had a successful golfing career at John Carroll University and Ashland University, and now coaches the girls golf team at Perkins High School.

Port Clinton High School senior Carlie Blaesing signed a letter of commitment this week to continue her education and swimming career at Bowling...

BY JOHN SCHAFFNER Both Port Clinton and Oak Harbor were supposed to be pretty good basketball teams this season. Friday night, the matchup between...