Kevin Winters remembers the letters from those who fought 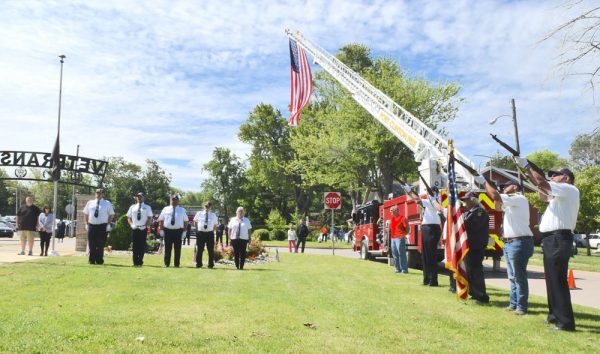 Letters home from veterans are an important part of their memory, said Kevin Winters of Port Clinton VFW Post 2480 in his Memorial Day address on Monday to a crowd at Veterans Park in downtown Port Clinton.

“It certainly was for me,” said Winters. “Tucked away in attics, closets, dresser drawers and basements throughout the country are millions of letters written by men and women who have served in the U.S. Armed Forces. There are countless emails being written and video chats broadcasted by active duty troops who have deployed to Iraq, Afghanistan and other countries around the world.

“The letters and emails are irreplaceable records of the sacrifices made by military personnel and their families. Every page is a reminder of those who paid the ultimate price for our freedom.”

Winters said that on Jan. 16, 1945, Lt. Thomas R. Kenny wrote his final words on a scrap off paper. The letter said: “Mommy and Dad, it is pretty hard to check out this way, without a fighting chance, but we can’t live forever. I’m not afraid to die, it’s just the thought of never seeing you again. Buy the Turkey Ranch with my money and just often think of me while you’re there.”

Winters said he received a letter while an elementary student in 1991 during Desert Storm from Alan Avery, an airman overseas. It asked if he was enjoying school and cub scouts, reiterated that he was fine, the war was going well, generally making small talk.

“Years later, I contacted Alan again through Facebook, and learned that he kept my letters sent to him so many years ago!” said Winters.

“Thanks to you all again for coming out today, and remember that all gave some. Some gave all.”