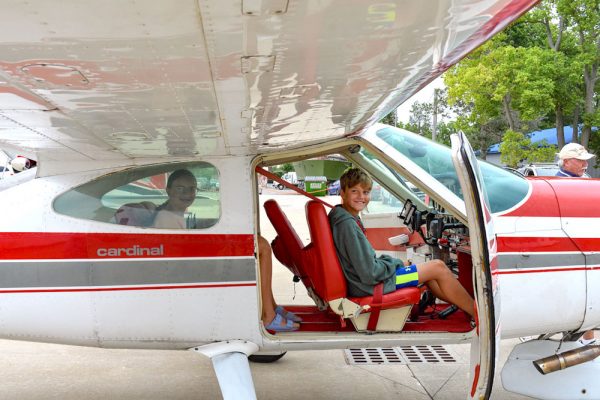 Colton Williams and his sister, Juliet Williams, prepare to take off on a Young Eagles Flight. (Photo by Sheri Trusty)

As 12-year-old Juliet Williams of Avon was taking off in a Cessna Cardinal at Erie-Ottawa International Airport on Sunday, Aug.14, she began texting her mom. In the front seat of the plane were her brother, 11-year-old Colton Williams, and pilot Ray Ebner. Thanks to volunteer pilots like Edner, Juliet and Colton were taking off on a free Young Eagles flight, an Experimental Aircraft Association (EAA) program designed to expose kids to the world of aviation.

Within moments, Juliet’s fear subsided, and by the end of the ride, she was full of smiles.

“I think it was really cool,” she said. “We could see our cottages from up there. They look like mini figures.”

Colton, too, was nervous about the flight, but he enjoyed it enough to take control of the plane when Ebner offered.

“It was really sweet up there,” Colton said. “Once I was in the air, it was exciting.” 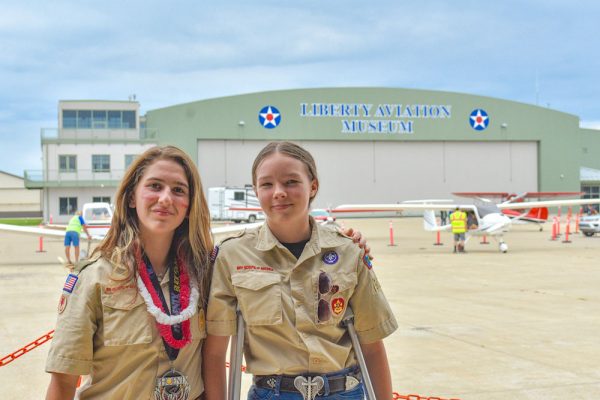 Inspiring that kind of enthusiasm is the purpose of Young Eagles flights, which were hosted that day by EAA Tin Goose Chapter 1247. The chapter’s president, Lisa Benjamin, said the group held a simultaneous pancake breakfast to raise funds for the group’s efforts to restore a Ford Tri-Motor at Liberty Aviation Museum while also exposing the public to the joy of flying.

“The Young Eagles have flown over 2 million kids worldwide,” Benjamin said. “Volunteer pilots give kids rides to get the next generation into aviation.”

The Young Eagles flights inspired a love of the skies in many children, and Erie-Ottawa International Airport Director Clay Finken understands the potential in that passion.

“In the early 2000s, I had my first experience with flying at a Young Eagles flight, and that’s what got me excited about aviation,” said Finken. “I became director of the airport about a year ago, and I absolutely love it. I think it’s the coolest place to work.”

Within the first two hours on Sunday, about 25 kids had already taken free Young Eagles flights. Each was given a certificate, a log book, and an EAA code that would access resources such as camp opportunities, comic books and free online flight training.

“I wish I was 12, so I could take advantage of all that,” Benjamin said. 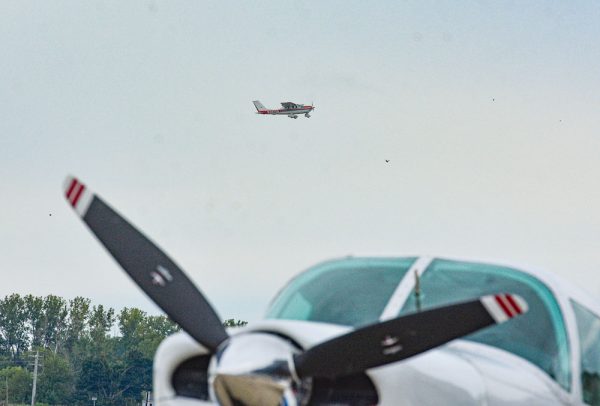 Ray Ebner flies above Erie-Ottawa International Airport with passengers Julie and Colton Williams. Colton had the chance to fly the plane during the flight. (Photo by Sheri Trusty)

Colton’s ride helped him earn a Boy Scout merit badge, and several other Scouts were flying to earn badges as well. Twelve-year-old Alex Mannon, 15-year-old Kailani Lau, and 14-year-old Alivia Ernsberger were among them.

“It’s not what I thought. It was better than I thought it would be,” Mannon said. “Taking off, I was a little nervous, but it was a smooth landing, and I had a good pilot.”

Lau fought past fear to board the plane, and she was glad she did.

“I’m actually afraid of planes, but I enjoyed it. The view was great, and the pilot was amazing,” Lau said.

Lau said the experience was as educational as it was fun. She learned about flying, airplane mechanics, and reading gauges.

“I learned a lot,” she said. “I asked the pilot everything I could ask.”

Ernsberger had the chance to fly the plane.

“It was like driving a car, kind of, but you had to pay attention to the gauges and how high you went,” Ernsberger said. “It was exciting.”