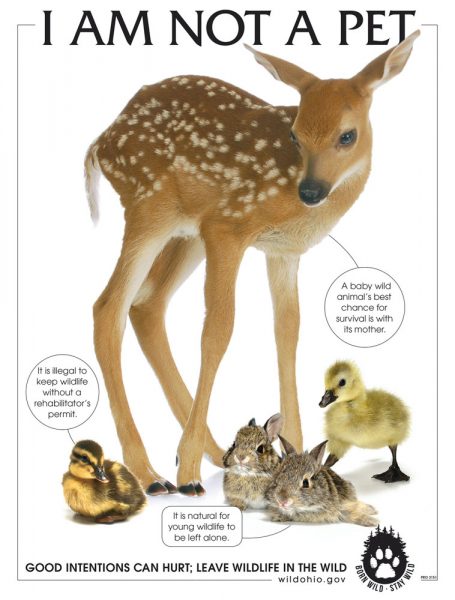 A baby bird has tumbled from its nest. A young white-tailed deer is discovered at the base of a tree. A nest of immature rabbits calls a suburban yard home.

These are all common situations Ohioans experience when wildlife reproduction peaks in the spring, according to the Ohio Division of Wildlife. Each situation has a natural solution, and professional intervention should remain a last resort.

It’s important to remember that wildlife parents are devoted to their young and rarely abandon them. A young wild animal’s best chance for survival is with its mother. Most wildlife taken in by people other than trained and licensed wildlife rehabilitators do not survive. In many cases, a young animal collected by a person is not lost or abandoned but was simply waiting for a parent to return.

Many species are raised by only one parent (usually the mother) who cannot be in two places at once. This means that baby wildlife must be left alone several times during the day, or even most of the time while the mother ventures off to find food for herself and her young. In the case of white-tailed deer, a doe will hide her young from predators by leaving it alone in a secluded spot, such as a grassy meadow or a flower bed. A hidden fawn has virtually no scent, and when left alone, it is difficult for predators to find it. The doe is usually nearby and will tend to the fawn during the night.

Baby birds that have fallen from their nests are among the most commonly encountered wildlife species removed from the wild by humans. Contrary to popular belief, human scent will not prevent the parents from returning to care for their young. Individuals should return a baby bird back to its nest and walk away so the parents can continue to feed it without fear of humans.

If you see open wounds or other injuries, or you know in fact that a young wild animal has lost its parent, research solutions before taking any action. Specific guidance on how to best help commonly encountered wildlife species is available on wildohio.gov.

State and federal laws protect and regulate wildlife in Ohio, and only trained and licensed wildlife rehabilitators, with permits issued by the Division of Wildlife, may possess and care for native wildlife. These laws are in place for the benefit of humans as well as wild animals.

To further protect young and vulnerable wild animals, keep pets under control so they do not raid nests or cause injuries. Remember to keep pets inoculated against parasites and diseases. Always check for nests before cutting down trees or clearing brush. It is best to cut trees and clear brush in the autumn when nesting season is finished. Teach children to respect wildlife and their habitat by observing wildlife from a distance.

Contact a local wildlife official before acting. Call 800-WILDLIFE (945-3543) or visit wildohio.gov to connect with the proper individuals and to learn more about species-specific guidance. Human intervention is always a wild animal’s last hope for survival, never its best hope.

Good intentions can hurt. Keep wildlife in the wild.