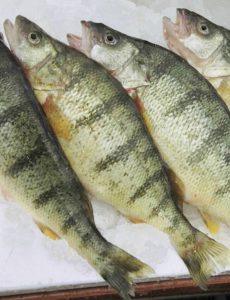 The yellow perch fishing this year has been a bust all around
Lake Erie, despite the best walleye fishing of a lifetime.
(Photo by D’Arcy Egan)

Over the last couple weeks, I have tried to give you spots where the yellow perch would be biting and each week I had hoped that the perch bite would get better. It has not.

I think as fisherman, we all know that there is something drastically wrong with the perch bite this year. The last good day of perch fished we enjoyed was Aug. 4, 2018. The next day it seemed like the perch just went away. There have been a few different theories, of course.

Fisherman seem to think that the amount of walleye in the lake has caused the perch to be scarce. The ODNR experts think that it’s a change in their eating habits. I won’t say its one or the other because I am not a biologist, but something is going on.

Everyone has been elated that the walleye bite is doing so well, and how good the hatches have been. One thing we do know is that over the next several years the walleye bite is going to remain strong. Hopefully, it is not at the cost of losing the fantastic perch fishing.

So, this week there is not going to be a yellow perch fishing report. I wish I could be giving you good news but unfortunately, perch are scarce.

The walleye continue to not disappoint. Those choosing to cast have been sticking to the shallow rock piles around the islands and have been doing great. Those that want to troll are still getting catches over at the Cedar Point dumping grounds. They are using Tru Trip diving planers and Silver Streak spoons.

Catfish have been another species that have remained strong. Amazing numbers have been being taken out of Sandusky Bay and also Lake Erie.
As temperatures start to cool, hopefully that will mean the perch fishing will start to rebound. So until next week, keep a tight line and hopefully at the end of it will be a chunky yellow perch.