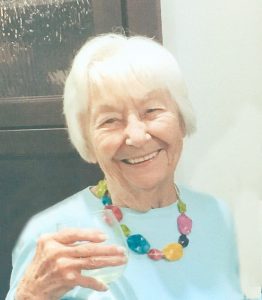 LaDonna graduated from Garfield H.S. in Terre Haute as a national honor society member and a fierce sports competitor. Tennis was her game and she continued to play into her seventies. She was employed as an administrative assistant at Mace Service, Inc. in Terre Haute, the law firm of Kaufman, Oberndorfer and Spainhour in downtown Norfolk, Va. and the Island Magic Jewelry Co. in Catawba Island.

She married Paul Thomas Nicholson on June 13, 1947, in Terre Haute, moving to Norfolk/Virginia Beach, Va. where they raised their daughter Carol and son Tom. They moved to Catawba Island the summer of 1967, living at the Island House Hotel and Lakeland Motel before moving to Schoolhouse Rd., Eagle Beach Cir. and NE Catawba Rd., her “park.” A few years after her husband Paul’s death, she moved back to be with her two sisters, residing at Shady Oak Village Senior Living Community in Terre Haute. After a five-year stay, she returned to Catawba Island, living at The Vineyards on Catawba.

Her biggest joy was seeing her grandchildren and their families grow. Having family gatherings for holidays and summer events at her “park” or a grandchild’s home was always a treat. “Such good laughs and fun,” she would say. She and Paul enjoyed traveling, taking off the beaten path routes visiting small towns and parks. Later in life, a trip around the Marblehead Peninsula, Port Clinton and Catawba Island would always have her saying “that was a good ride!” LaDonna would be at a great loss without her “puter” for keeping in touch with family and friends, typing letters, emails and poems. Bless you internet providers and “puter” repair guys.

LaDonna received loving care during her final weeks at home by her granddaughters Michelle, NP, Megan, RN and Monica as well as best friend Susan and son Tom along with support from Stein Hospice.

Per LaDonna’s wishes, cremation had been requested with services provided by Gerner-Wolf Walker Funeral Home and Crematory, Port Clinton. A private burial will be held in the spring at Catawba Island Cemetery beside her beloved husband, Paul and her left too soon daughter, Carol. Memorial contributions may be made to the donor’s choice.