Lake Erie algal blooms forecast to be smaller in 2021 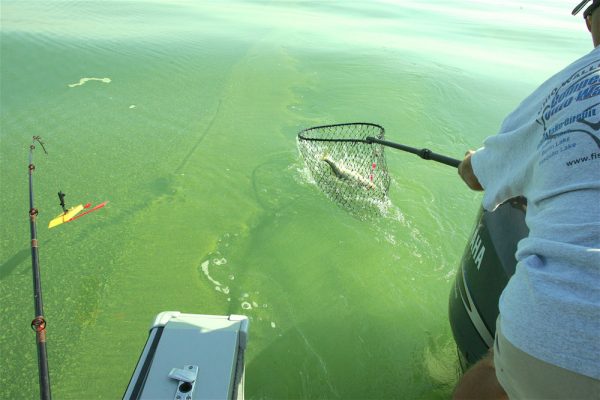 A Lake Erie fisherman battles a walleye and algal blooms while fishing in 2013. (Photo by D’Arcy Patrick Egan)

Ohio has been working with farmers and funding research and tactics for reducing the flow of phosphorus from the Maumee River Watershed into Lake Erie, the major culprit for the annual noxious green algal blooms that have plagued the Western Basin.

Mother Nature gave the quest quite a hand this spring to potentially reduce the annual Harmful Algal Blooms (HABs).

Checking its data through early May, the National Oceanic and Atmospheric Administration and the National Center for Water Quality Research at Heidelberg University in Tiffin, Ohio, agreed the dry spring in the Northwest Ohio region could result in a smaller HAB forecast for Lake Erie during the late summer months, prime time for HABs to flourish.

“We do not expect a large bloom,” said the experts in their first report on the expected 2021 HAB season. It was noted that water flow from the Maumee River was below average in March and April. That meant less HAB-creating phosphorus from the manure generated by factory livestock operations and crop farming made it to Lake Erie to give sustenance to the slimy, toxic blooms. 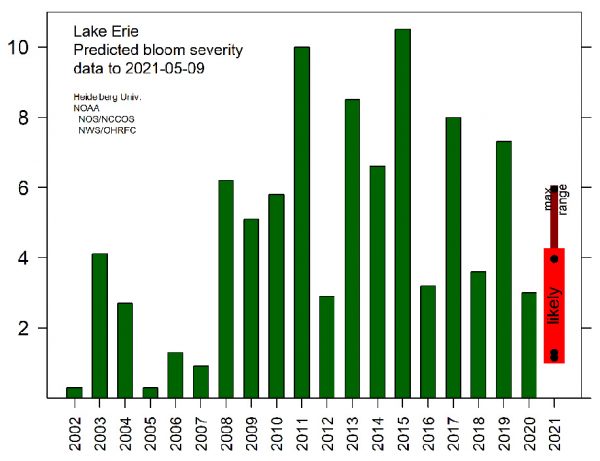 It all depends how much rain the region gets in May and June, said Laura Johnson of Heidelberg University.

The major forecast for the size of this year’s HABs will be announced at The Ohio State University’s Stone Laboratory on Gibraltar Island, across the water from Put-in-Bay, on Wednesday, June 30. The announcement will be on Zoom this year.

In recent weeks, the growing number of concentrated animal feeding operations (CAFOs) in the Maumee River Watershed have been criticized in area newspapers and by such veteran Lake Erie researchers as Jeff Reutter, the retired long-time director of Ohio Sea Grant, Toledo Mayor Wade Kapszukiewicz and The Toledo Blade.

The Blade pointed out on its editorial pages that while “there is some dispute about the data, some environmental activists believe the western Lake Erie basin’s nearly 150 CAFOs produce the manure equivalent of sewage generated by the cities of Los Angeles and Chicago. Adding more without the regulations that would guarantee safe disposal of all that manure is madness.

The Ohio Department of Agriculture claims its hands are tied when it comes to approving permits for CAFOs that meet all the regulatory requirements — none of which have anything to do with how they contribute to Lake Erie’s algae-feeding pollution.”