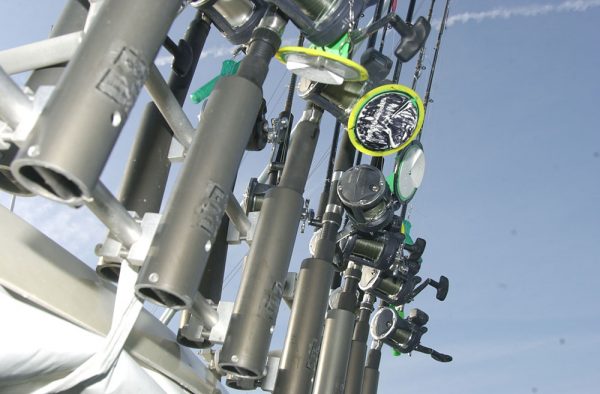 Many fishing boats on Lake Erie will look like porcupines next year, with an increase in the allowable number of fishing lines to increase to three per angler in 2020. A typical charter boat with six anglers, a captain and first mate could troll for walleye or steelhead trout next year with 24 lines in the water. (Photo by D’Arcy Egan)

Anglers may use a maximum of three fishing lines on Ohio’s portion of Lake Erie and the Ohio River starting on Jan. 1, 2020, following new regulations passed by the Ohio Wildlife Council, according to the Ohio Department of Natural Resources (ODNR) Division of Wildlife.

A rules change that is long sought by Lake Erie deepwater anglers who troll for walleye and steelhead trout, the council approved the use of three lines per person while fishing on Ohio’s portion of Lake Erie, including areas immediately upstream in creeks, rivers and tributaries, as well as the western and eastern units of Ohio River.

Regulations will still only allow a person to fish with up to two lines in the remainder of the state.

“This new regulation makes it easier for Ohioans to enjoy fishing on the two most iconic bodies of water in the Buckeye State,” said Division of Wildlife Chief Kendra Wecker. “Providing additional options increases the opportunities to have a great day on these wonderful resources.”

On the Ohio River, the council approved reducing the combined daily bag limit of sauger, saugeye and walleye to six fish. The sauger, saugeye and walleye length limit was set at 14 inches in the western fishing unit (from South Point west to the Indiana state line). These changes are designed to align Ohio River fishing regulations with bordering states. The bag limit changes take effect Jan. 1, 2020.

Hunting and trapping access to Eagle Creek Wildlife Area in Brown County is by special permit only from Sept. 1 through May 31 annually. Eagle Creek is maintained as an area where beginning hunters may participate in mentored hunts through a drawing system.

A complete list of approved proposals is available at wildohio.gov.