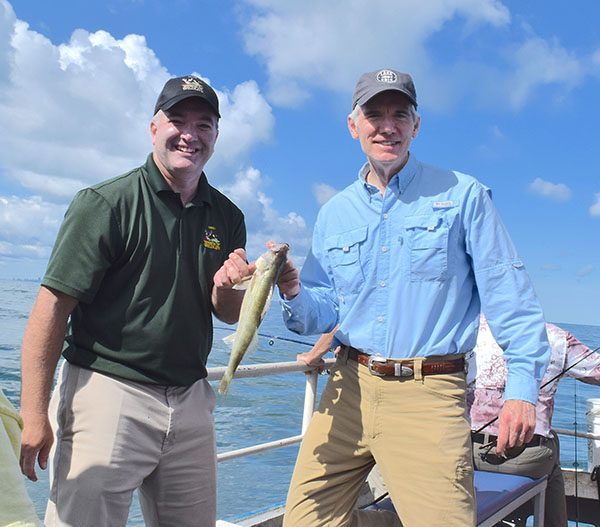 Lake Erie Administrator Travis Hartman of the Sandusky Fisheries Research Station lands a Lake Erie walleye for Sen. Rob Portman while on his Lake Erie Tour on Saturday. They were fishing off the Chagrin River.

Walleye are still kings of Lake Erie, but the yellow perch fishing is starting to pick up now. One thing that I want to stress to everyone this week, though, is to watch were you are going when out and about on the lake because the commercial fisherman have their nets out and some boaters are ending up being stuck in them.

The walleye have remained one of the most consistent species if fish to catch this year. Casters and trollers have both been going northeast of the Cedar Point dumping grounds. The waters north of the weather buoy off Vermilion on the Ohio-Ontario border on Lake Erie has been holding its own lately. Those that are choosing to troll have remained true to the Tru-trip diving planers and spoons. Now they are setting them 70 to 110 feet back. They are also now using shallow-running crankbaits as well. The anglers that are casting have still been using 1½-ounce weights. Use a 20 to 25 count when casting.

Perch have started to bite west of the islands, with the H Can area waters the most prominent spot for success. There have been plenty of pockets of perch around the islands lately as well. Bays Edge Fish Cleaning has seen more and more boxes of perch. The perch have been staying around the deeper edges of the drop-offs in around 30 to 40 feet of water. Don’t be afraid to crank your lines four or five counts off the bottom of the lake. While fishing, watch the screen on your fish finder. Just because you see some fish on there, it doesn’t mean they are going to bite. Look for “bait” marks on the sonar screen.

Catfish seem to have slowed down a little, according to Misty in the fish shop. She hasn’t seen as many coolers of catfish coming in lately. Nightcrawlers, raw shrimp and manufactured catfish baits are all still working best.

Emerald shiners have been very sporadic lately. Shannon, who works in the bait store, did have some over the weekend. Golden shiners are working just as well as the emerald shiners right now. Hopefully we will start to see more emeralds sooner than later. As always, stay safe out there on the lake everyone and take time to enjoy yourselves.