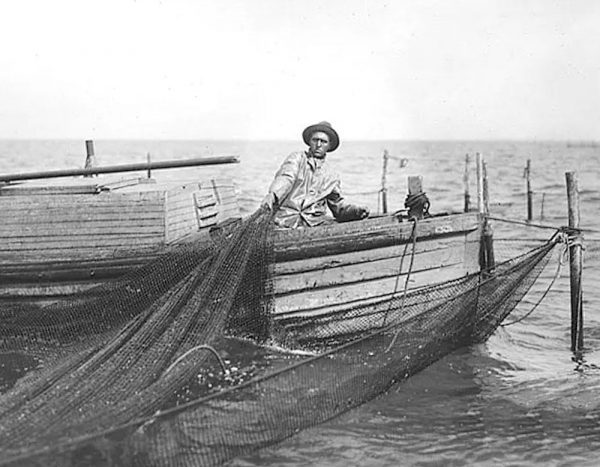 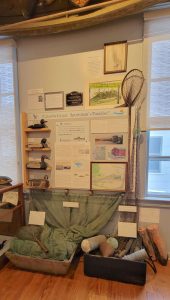 A new exhibit at the Catawba Museum at Union Chapel will feature the commercial and sport fishing on Lake Erie.

CATAWBA ISLAND – A new exhibit featuring Lake Erie’s traditional sport and commercial fishing is being developed in the Catawba Museum at Union Chapel.

The Union Chapel Museum is committed to preserving and protecting the unique heritage of Catawba Island. Each year the Board of Catawba Island Historical Society, the organization which operates the museum, reviews exhibits to determine if changes can or should be made. Action is taken as the availability of new information or additional artifacts permits.

Closed seasonally from mid-October to mid-May, the Museum uses down time to prepare for the following year’s operation. During the winter the new exhibit about the area’s sport and commercial fishing activities has been expanded. Distinctions between Seine, Pound and Trap Net fishing are now explained. Samples of the equipment used are also now on display.

Dr. Richard Thomas, a Historical Society Board Member and the Trustee with principal responsibility for designing the Museum displays, noted that “An enhanced fishing exhibit was the idea of Don Rhodes, our Emeritus Board member who recently passed away. Artifacts used to expand explanation of the fish harvesting techniques came from a collection he amassed over more than a half century.”

Different types of nets, buoys and weights are used by fishermen depending upon the method of harvesting they pursue. Several examples of each have been integrated into the display. So have some unique and rare glass floats.

The display also recounts the story of how an Ohio court case severely compromised the Lake Erie white fish population. White fish were subsequently replaced by introducing an alternate species to local waters.

“The U.S. Commission of Fish and Fisheries introduced European carp in 1888 to compensate for the loss of white fish,” said Thomas. “In just over a decade more than 6 million tons per year of carp were being caught. South of this area the popular new fish became known as Kentucky Tuna.”

Plans for additional new and expanded 2022 displays will be announced shortly.

Catawba Museum at Union Chapel is scheduled to reopen on Saturday, May 14. This year the operating hours will be from 10 a.m. to 4 p.m. on Mondays, Wednesdays and Thursdays, and on the 2nd and 4th Saturdays of each month until mid-October.

There is no charge to visit. Operating expense is primarily funded by memberships in the Catawba Island Historical Society.

In addition to its traditional perks of membership, the Society will conduct a special St. Paddy’s Day prize drawing from those who become 2022 members by March 17. Learn more about membership and the drawing on-line at www.catawbaislandhistoricalsociety.com or by calling the museum at 419-967-5363.