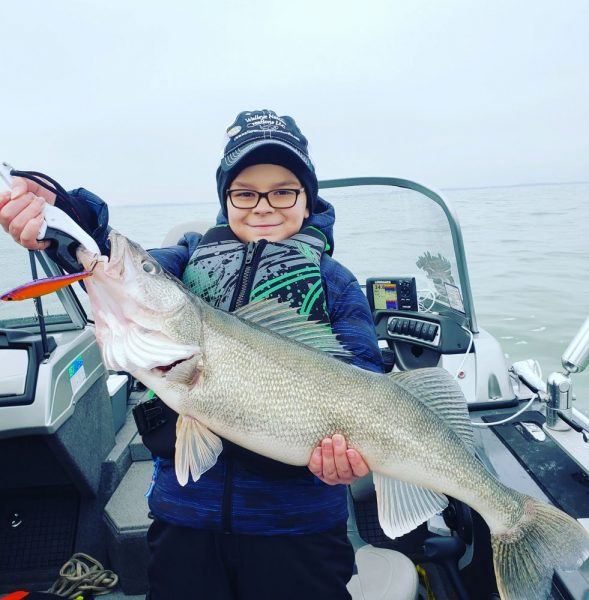 This year’s walleye reproductive success couldn’t match the record-setting spawning season of 2021, but it will add large schools of catchable walleye in two or three years.

The results are consistent with the recent trend of highly successful hatches for both yellow perch and walleye in Lake Erie’s shallowest and warmest basin, and strengthens the extremely positive long-term lakewide outlook for walleye anglers.

While the yellow perch hatches in central and eastern Lake Erie continue to be below average, bringing sharp cuts in recent years of the daily bag limit for sports anglers and a reduction in the Ohio commercial fishing total allowable catch (TAC). 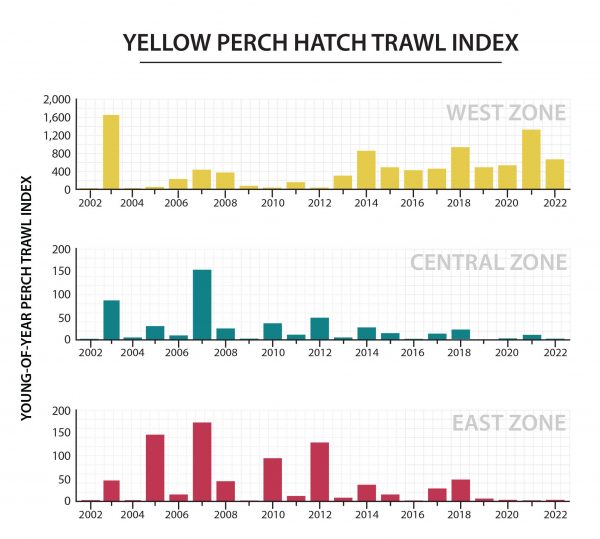 But there is some optimism, said Travis Hartman, the Division of Wildlife’s Lake Erie Fisheries Program Administrator.

“There’s more to the story when it comes to yellow perch,” said Hartman. “The yellow perch we’ve been checking are very healthy fish, and they’re growing faster. The average length of the perch in each year class we checked has been the best we’ve ever seen. There has been an obvious shift in their diet, from shiner minnows and other small baitfish to smaller but plentiful midges, spiny water fleas and mayflies.”

Commercial and sport anglers understandably focused on Western Lake Erie yellow perch in 2022, and will likely do so again this coming year. Division of Wildlife survey results this year have been combined with the Ontario Ministry of Natural Resources and Forestry surveys to configure a basin-wide hatch index in western Lake Erie. The 2022 western basin walleye hatch was 83 fish per hectare (a hectare is 2.47 times larger than an acre), the ninth largest in the survey’s 35-year history and well above the average of 55. “Lake Erie walleye anglers will continue to benefit from the terrific walleye population,” said Division of Wildlife Chief Kendra Wecker. “This year’s hatch will grow to catchable sizes in two or three years, when it will contribute to decades of excellent fishing in the Walleye Capital of the World.”

The mid-summer and late fall yellow perch fishing around Western Lake Erie provided some of the best harvest rates observed in years, said officials, along with excellent size ranges. In the central basin, walleye production continued the trend of above average hatches with survey results of 14 young-of-year walleye per hectare, well above the average of 6 per hectare. This was the seventh highest of 33 survey years. For yellow perch, the Central Basin is split into two management zones, the central zone (Huron to Fairport Harbor) and the east zone (Fairport Harbor to Conneaut). 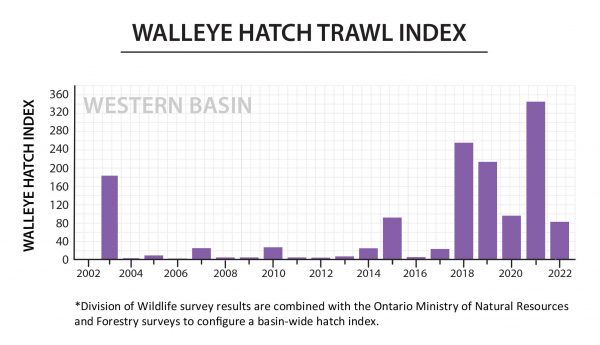 Results showed below average yellow perch hatches in each, with an index of 3 young-of-year perch per hectare in the central zone, below the average of 39. Similar results were found in the east zone, with an index of 3 per hectare, below the average of 38. “Lake Erie yellow perch are surveyed and managed as regional populations with different management zones. Our surveys during the past few years have shown a marked difference in the yellow perch hatch when comparing the west, central, and east zones,” said Hartman. “The Division of Wildlife uses these zones to monitor perch hatches and, by comparing results to previous years, determine safe harvest levels.”

In the Ohio waters of Lake Erie, the daily bag limit for yellow perch has continued to be 30 per day in Western Lake Erie. The reduced daily bag limit of just 10 perch per day is in place east of Huron. Ohio commercial trap netters had a quota, or TAC, of 300,000 pounds from Huron to Fairport Harbor in 2022. They reported catching just 102,000 pounds, said Hartman. Lake Erie fish stocks are managed by the bordering states — Ohio, Michigan, Pennsylvania and New York — and the Province of Ontario. All of the fisheries research gathered is shared among the partners, and the Lake Erie Committee that will meet March 29-30 in Hamilton, Ontario will determine the total lakewide allowable catch for 2023.

Five good walleye hatches in a row in the warm, shallow Ohio waters of their prime spring spawning grounds is unusual, admitted Hartman. High water might be the trigger for the amazing spawning success. Lake Erie was experiencing a high water period in 2003 when Ohio waters experienced their best walleye hatch in modern history.

Record high water levels have persisted over the last decade, and good walleye hatches have become the norm. The 2021 walleye hatch was rated even larger than the 2003 hatch. That has prompted Ohio officials to brag that Lake Erie had the best walleye fishing in the world, as the numbers of charter fishing boats increased and non-resident fishermen flocked to Lake Erie.