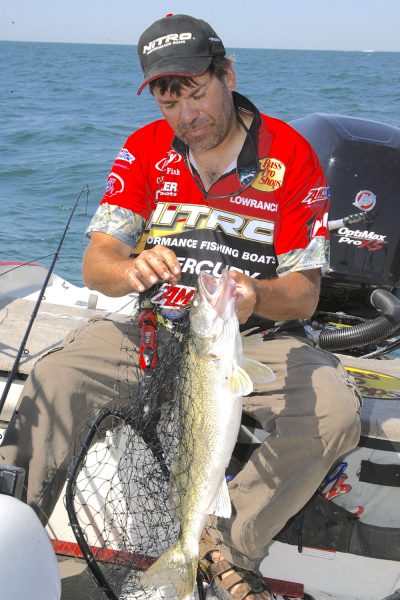 Fishermen from around the country flock to Lake Erie, the Walleye Capital of the World, to tangle with its incredible number of trophy fish. Wisconsin tournament angler Keith Kavajecz untangles another big walleye from his landing net.

As the fishing stays tough for yellow perch fisherman, the walleye fishing has remained great along the Ohio shoreline of Lake Erie. Part of this is due to the great walleye hatches we have had the last seven to eight years, according to the Ohio Department of Natural Resources.

We have had some great hatches of yellow perch as well over the last few years, though they seem to have changed their eating habits a little bit. The commercial fisherman that have had nets out have noticed many sand fleas and freshwater shrimp on their nets, now a main forage for yellow perch.

Schools of perch have been difficult to find for both hook-and-line anglers and commercial trap net fishermen. The traditional technique of working emerald shiner minnows close to the bottom of Lake Erie has not been working this year.

There has definitely been no problems for anglers choosing to go out walleye fishing. As good as the walleye fishing has been for trollers, now the drift-and-cast fishermen are having the luck. Most have been going over to the rock piles in front of the Davis-Besse nuclear plant and casting to Toussaint and Crib reefs. Single-hook Weapon spinner rigs cast and retrieved in about 10 to 15 feet of water is going to be your best bet. Trolling has slowed quite a bit because of all the weeds that are in the waters due to the winds that we have had, but trollers are still doing well with Tru-Trip diving planeres, Silver Streak spoons and Bandit crankbaits set at 60 to 100 feet back.

Fishermen probing 15 to 17 feet of water are finding some success. The waters off Port Clinton and the mouth of the Portage River have been spotlighted for fair catches for patient perch fishermen.

These last few years, channel catfish fishing has stayed consistent around Sandusky Bay. The best way to hook into some catfish has been by using raw fresh water shrimp for bait. They seem to enjoy the shrimp over regular night crawlers.

Bass fishing has become very good over the last few weeks in around 10 to 16 feet of water. The bait of choice has been softcraws, which are readily available.

Fishermen should be happy that we have seen such amazing hatches of both walleye and perch over the last several years. I would love to see the yellow perch bite “turn on.” Until next week stay safe and be careful out on the water.