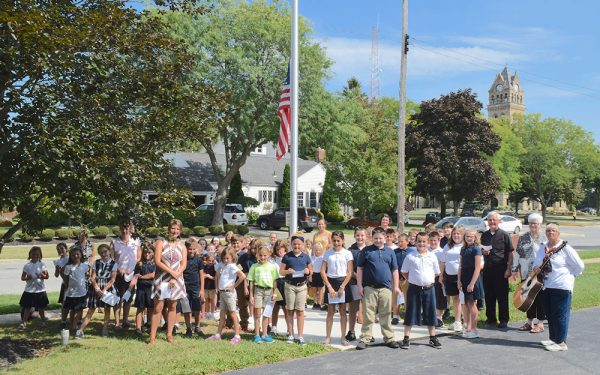 The students and teachers at Immaculate Conception Parish and School in Port Clinton held a Patriots Day Ceremony at noon on Wednesday,
Sept. 11. Music teacher Mary Krejci played patriot music on her guitar, including “God Bless America,” as the youngsters sang. (Photo by D’Arcy Egan)

The Sandusky Fisheries Research Unit of the Ohio Division of Wildlife performs a trawl survey of 40 Lake Erie locations each August to determine the success of the spring walleye and yellow perch hatches. For sport fishermen, the results have been spectacular.

“The 2019 walleye hatch was the second highest we’ve ever seen,” said Travis Hartman, head of Lake Erie fisheries management. “It is higher than last year. If you step back and look at the big picture, we’ve now had back-to-back hatches bigger than 2003.

“It is safe to say that the Lake Erie walleye fishing is the finest in the world right now.”

The 2003 walleye hatch was so large it was considered to be almost a fluke. It was followed by a few years of less than mediocre reproduction, but Lake Erie fishermen feasted on the dominant 2003 year class of walleye for more than a decade.

In recent years, walleye have had consistently successful spawning seasons, resulting in tremendous catches this year all along the Ohio shoreline. Hartman pointed to the creel surveys this year, which have shown anglers are catching walleye at a rate that has never been seen in modern times. 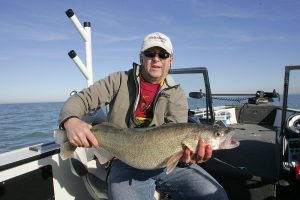 Dave Dombrowski, the Director of Broadcasting for the Cleveland Cavaliers, is also an avid Lake Erie walleye fisherman. (Photo by D’Arcy Egan)

This year, said Hartman, the catch rate has soared above 1.0 walleye per hour of angling effort. That means this year’s anglers are catching walleye with half of the angling effort of the 1980s, a time period when fishermen were catching Ohio’s quota of walleye, and sometimes more.

“The next decade of Lake Erie walleye fishing is simply going to be incredible,” said Hartman. “With all of those year classes of walleye contributing to the population, we’re going to have walleye fishing like we’ve never seen, and for a long time,” he said.

That is the reason the Ohio Wildlife Council has discontinued protecting walleye during the spring spawning season with a reduced four-fish limit.
The limit is now six walleye per day, and year round. Don’t expect the daily bag limit to go up, though. Hartman said that a six-fish limit is a good place to be, taking into consideration the high rate of success by fishermen these days.

The Ohio Division of Wildlife has yet to combine its trawl survey results with the those performed by Ontario, which controls the north side of Lake Erie. Each resource agency has 40 sites where walleye are sampled in August, when young of the year walleye have grown large enough to be counted. The sites are about a hectare (2.4 acres) in size.

The 20-year average number of walleye captured at each Ohio site has been 27 walleye. This year, it was 143 walleye.

Local yellow perch fishermen have been concerned about the lack of their favorite fish. Hartman said that while yellow perch have become more scarce in the Central Basin of Lake Erie, which stretches from east of Huron to Conneaut, the Western Basin perch population is quite good.

“The perch are out there, but it seems they are changing their diet and the locations where they feed,” Hartman said. “We’ve had two good perch hatches in a row (2018 and 2019), and saw lots of perch in our nets. The perch we’ve checked, however, show they’ve mainly been feeding on invertebrates such as spiny water fleas, midge larvae and mayfly larvae, rather than forage fish such as emerald shiner minnows. They’re obviously getting enough to eat, because they’re growing as fast as we’ve ever seen. A one-year-old yellow perch is pushing seven inches.”