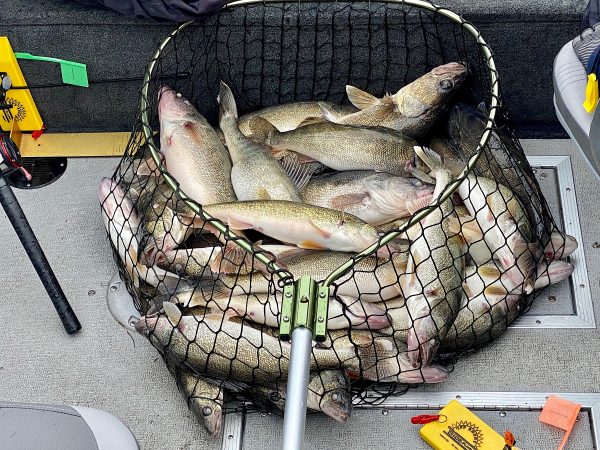 The so-called Lake Erie quotas have been handed out to the various states and provinces bordering the Walleye Capital of the World, and the numbers are staggering.

“We have estimated today’s population of walleye — fish that are two years old, or older — is about 116 million,” said Scott Hale, the head of Ohio fisheries management for the Ohio Department of Natural Resources (ODNR). “Our forecast for 2021 is a walleye population of about 151 million fish.”

That is the easiest way to let the world know Lake Erie walleye anglers are doing their happy dance right now. The Lake Erie Committee of the Great Lakes Fishery Commission verified that phenomenal spawning success at its annual meetings last week in Markham, Ontario.

Sport fishermen should not be surprised, including the dozens who launched boats at Catawba Island State Park and the Mazurik Access Area on Marblehead on Friday. Director Mary Mertz of the ODNR, though, had a warning for them.

Be smart or stay home.

“Fishermen have to be smart and use common sense to deal with the coronavirus pandemic in Ohio,” said Mertz. “They must take social distancing seriously, one of the keys to slowing the spread of the virus.

“We want everyone to continue enjoying Ohio’s great outdoors, whether they hike or bike in the park, launch a boat on Lake Erie or wade our rivers and streams to fish for trout. They must do it safely, though, by practicing social distancing.”

As an example, playgrounds, campgrounds and other places where kids and families congregate have been closed.

There have been complaints about walleye fishermen from around Ohio and the country arriving in Ottawa County and putting residents at risk. ODNR officers will be watching to make sure they do keep a physical distance of at least six feet from others while at the launch or in a boat, or the launch ramps will be closed, said Mertz.

The Lake Erie Committee of the Great Lakes Fishery Commission set its lakewide Total Allowable Catch (TAC) last week for walleye and yellow perch. Walleye have been in the spotlight, for good reasons. Their spawning success has been tremendous in recent years.

Ohio gets the lion’s share in 2020 of an estimated walleye population of 10.237 million fish with its allocation of 5.232 million walleye. Ontario gets 4.408 million walleye, followed by Michigan’s 0.597 million.

Because of the growing population of walleye, the Ohio Division of Wildlife has already liberalized the more restrictive early-season walleye limits, removing the daily bag limit of four fish from March 1-April 30 designed to protect the spawning fish. The Ohio walleye bag limit of six fish is now year-round, except for the four-fish spring limit on Sandusky Bay and the Sandusky River.

There are no plans to increase the daily bag limit of six walleye. There has been some talk of decreasing the walleye length limit of 15 inches because of the large numbers of two-year-old walleye.

“The largest year class in our present population is the 2018 class, which makes up about 75 percent of the population,” said Hale. “Anglers will be catching lots of walleye that are under the 15-inch size limit this summer, but those walleye will be legal to keep in 2021.”

Ohio yellow perch fishermen have lamented the declining numbers of their favorite fish, and the TAC reflects the slump. The special Lake Erie Percid Management Advisory Group (LEPMAG) has established a lakeside TAC of 7.805 million pounds. Perch allocations are set in pounds, while walleye limits are set by the number of fish.