SANDUSKY, OHIO — Lake Erie’s walleye fishing sparkled this year all along the Ohio shoreline. Charter captains and sport anglers sang its praises after consistently catching limits of their favorite fish from spring through fall. They wondered if it was possible the walleye bonanza could possible get any better.

The answer, now that Ohio and Ontario fisheries managers have wrapped up their August trawl net surveys, is a resounding “yes!” The two fisheries agencies performed 80 trawl net surveys in August, a time of year when walleye hatched in March and April had grown big enough to net and count.

“When we crunched the Ohio numbers, we had netted an average of 111 young-of-the-year (YOY) walleye per hectare (almost 2.5 acres), which was pretty close to the 155 per hectare we collected in 2003, our biggest walleye hatch on record,” said Travis Hartman, the Lake Erie fisheries administrator at the Ohio Division of Wildlife’s Sandusky Research Station.

When Ohio combined its numbers with the Ontario Ministry of Natural Resources trawl surveys in the Western Basin, said Hartman, the fisheries experts discovered the overall population, called the interagency index, was more than 250 YOY walleye.

“That not only topped the 2003 count of 183 YOY per hectare in the Western Basin, but easily set an all-time record for walleye production,” said Hartman. “As retired ODOW fisheries supervisor Gary Isbell used to say after the phenomenal 2003 hatch, ‘these are the good, old days of walleye fishing right now.”

Isbell knew people would be talking about the great fishing for generations.

In fact, said Hartman, the basin-wide 2015 and 2018 hatches are two of the largest the Ohio biologists have ever seen.

The best news is the Lake Erie’s walleye have had consistent spawning success over the last five years. After the record-setting 2003 class of walleye, spawning success was poor to fair during the next decade.

While there are still quite a few trophy 13-year-old walleye from the 2003 class swimming in Lake Erie, the hatches the last five years have added a wide range of walleye sizes. In a couple of years the 2018 hatch size range will be approaching the legal length limit of 15 inches.

Yellow perch anglers should be happy, as well. The yellow perch trawl survey showed this year’s YOY total was 510 perch per hectare, second in recent years only to the 2014 catch of 668 per hectare. It is the 2014 class that had produced plenty of jumbo yellow perch to delight Western Basin anglers this summer.

It’s likely Ohio’s commercial fishermen would like to share the walleye bounty. They have not been allowed to net walleye since 1970, a time when efficient gill nets were allowed. Huge harvests of walleye slumped after record gill net catches, and the popular Lake Erie blue pike, a cousin of the walleye, became extinct in Lake Erie. 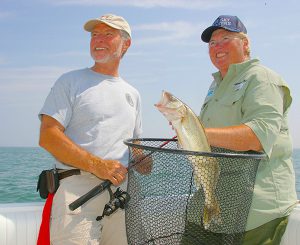