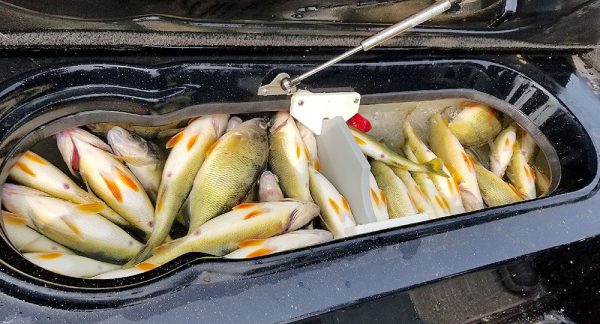 Good catches of yellow perch are finally showing up around the Western Basin of Lake Erie.

The yellow perch are back!

Totally out of the blue, last week the Lake Erie yellow perch came in around the Western Basin, and some of those big schools settled in for a while to feed. Not just small, sporadic catches, either, but limit catches were brought into Bay’s Edge Fish Cleaning.

The best areas have been from D Can all the way west along all the can lines. That included C Can and B Can, and all of the cans off the edges of the rocks.

Perch anglers should make sure they’re dunking emerald shiner minnows along the rocks and not in the rocks. There were also catches reported north of Kelleys Island.

Since this was the just the beginning of the good perch fishing, we will have more information next week. Most of the yellow perch caught have been 8 to 10 inches in length. Our store has had shiner minnows and our suppliers have said that they are catching them better than they have in years.

Our captains noted that they have not been seeing the fleas on the lines this year as well. Without the fleas for the perch to feed on, plus having the minnow population on the rise, maybe that is why the perch are back again so strong.

Let’s give credit where credit is due and that is to the Ohio Division of Wildlife fisheries biologists, since they have been telling us that the perch were there all along — and they seem to be right.

Walleye fishing continues to be good. The best spots to troll or drift and cast are still east of Kelleys Island, with trollers going about five miles off the island. Tru-Trip diving planers, spoons and worm harnesses have been doing the job.

A little tip for fishermen is to put nightcrawlers on the spoons as well. Casters have been going farther to get good catches of walleye. The favorite spot seems to be the weather buoy on the Ohio-Ontario border, north of Vermilion. Walleye fishermen have also been having some sporadic luck in the mornings while fishing the reefs and rock piles.

Anglers are still getting amazing catches of catfish out of Sandusky Bay. Raw shrimp and chicken livers, as well as manufactured catfish baits. are all working.

The big story this week, is that the yellow perch are back, and it’s about time. Until next week enjoy the good fishing, stay safe, have fun, take a kid fishing and as always keep a tight line!