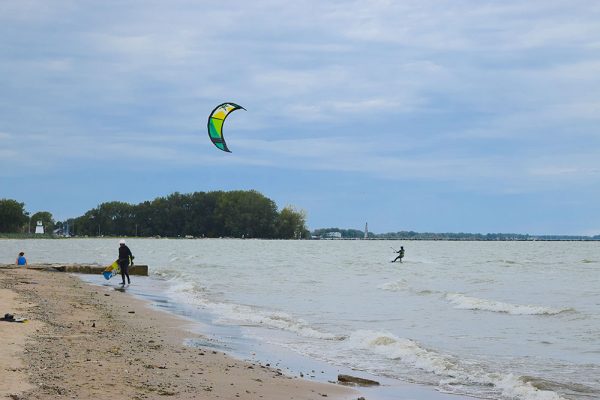 Sandy beaches are shrinking all along the Lake Erie shoreline because of high water levels, and causing erosion of the Ohio shoreline. These windsurfers still made the trip from Columbus to Port Clinton last summer to enjoy the vast waters of Lake Erie. (Photo by D’Arcy Egan)

Lake Erie set a monthly water level record for February over the last 29 days — after all, it is a leap year — and with correspondingly high water in the Upper Great Lakes providing 90 percent of Lake Erie’s water, the experts predict another four-inch rise in water levels in March.

“Using U.S. Army Corps of Engineers data, we should see record-breaking monthly high water levels on Lake Erie through May, at the very least,” said Jeff Reutter, the retired director of Ohio Sea Grant and Stone Lab and chairman of the board of trustees of The Nature Conservancy in Ohio.

Reutter isn’t counting on a summer drought that would bring water levels down on Lake Erie, which is the southernmost, shallowest, warmest and most nutrient- enriched of the Great Lakes.

“Last year’s June water levels were the highest Lake Erie has experienced since 1918,” said Reutter, on his way to visit Geneva State Park on Tuesday night to speak to a crowd about algal blooms, water levels, invasive species and what to expect in the months to come around Northern Ohio.

Wet spring weather has been the norm in recent years, with seven wet springs and two dry springs the last nine years. It would take a severe summer and fall drought to thwart the rising waters, but the flow from the Upper Great Lakes would still be a problem.

“We have to remember that about 90 percent of Lake Erie’s water comes from lakes Michigan, Huron and St. Clair through the Detroit River,” said Reutter, “and those lakes are about a foot higher right now than they were at this time last year.”

“You can still hold out hope for water levels going down this summer and fall if we have exceptionally dry seasons or even a drought on Lake Erie. Studying the information we’re getting and the recent history of Lake Erie, I wouldn’t bet on it,” said Reutter.

Reutter is regularly touring Ohio and the region to keep people informed about Lake Erie issues.

“The need has never been greater for everyone to know the challenges of protecting and improving Lake Erie,” said Reutter, who believes in the Three E’s to fight the problems: Economy, Environment and Education. “State and federal governments and private groups have to focus on Great Lakes problems, from the changing climate and high water to phosphorus pollution and the massive harmful algal blooms.”