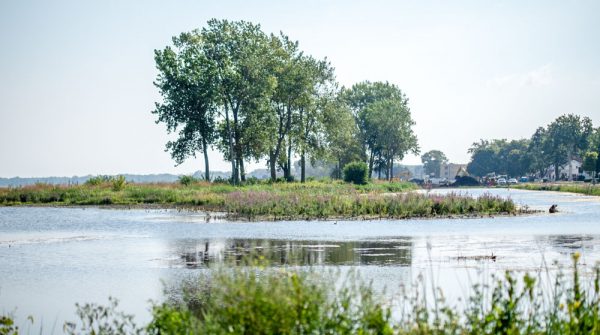 The unique Port Clinton Lakeshore Preserve is being created on 14 acres of the Lake Erie shoreline in downtown Port Clinton, an urban area that could transition into a wetlands Classroom for Tomorrow in a few short years.

It hasn’t been an easy transition. U.S. Army Corp of Engineers have had to dig out out an extensive invasion of phragmites and other non-native species, as well as short-stopping an invasion of common carp when floods inundated the shoreline in late May. The $1.4 million project, though, will be a showplace for important wetlands development in the Great Lakes region.

“With our background in ecosystem administration, this is quite an opportunity for creating a wetlands that is close to home and convenient to display in such an urban setting,” said U.S. Army Corp of Engineers Project Manager Russell Brandenburg of the USACE-Buffalo District.

As native plants take hold and the preserve is managed by the City of Port Clinton, the U.S. Fish and Wildlife Service, Ohio Department of Natural Resources and many other partners, the project could soon become a wetlands laboratory, providing a state-of-the-art wetlands classrooms for students of all ages. 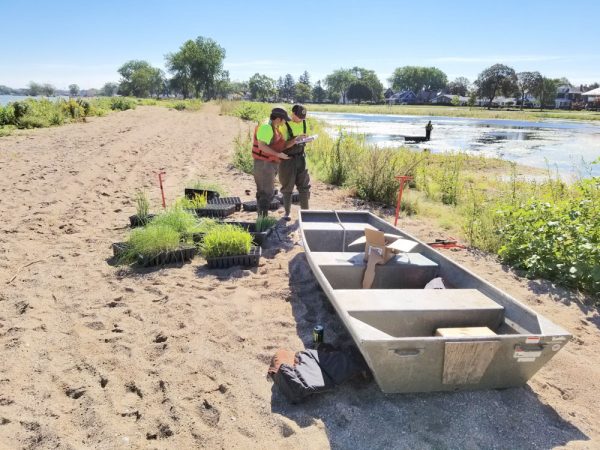 Army Corps of Engineers workers are carefully recreating a downtown wetlands in Port Clinton that will still take years to maintain and mature.

“We’ll be turning the project over to Port Clinton and the USFWS, who have agreed to do the long-term maintenance,” said Brandenburg. “The Army Corp doesn’t have the authority to stick around, but the USFWS can provide more continuous help.” 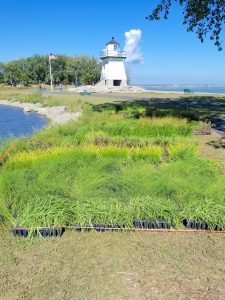 Army Corps of Engineers workers are carefully recreating a downtown wetlands in Port Clinton that will still take years to maintain and mature.

That was evident in late May, when big Northeast winds flooded the downtown Port Clinton area and Waterworks Park, temporarily shutting down the weekend Walleye Festival. Schools of common carp from Lake Erie crowded into the new “lake” the storm created, and the USFWS quickly moved in to remove the invasive carp using electric shocking gear to stun and remove the fish.

“The elaborate wetlands systems being created at the Port Clinton Lakeshore Preserve will be a model for wetlands managers, and a classroom for students,” said Brandenburg. “It may not be a big wetlands, but it will be convenient for students and teachers to utilize once it has been completed.”

For now, wooden snow fence has been put in place to protect the preserve from animals such as muskrats that might impact the new, native vegetation, keep out digging predators and stop wind-blown Lake Erie beach sand from filling in the wetlands, said Port Clinton Safety-Service Director Tracy Colston. That includes people, at least until the vegetation matures.

“We’ve enjoyed a great partnership with the Corp of Engineeers, and with the USFWS,” said Colston. “It’s great for the city, having them work with us. Their guidance is instrumental in the success of the wetlands.”

The Port Clinton project will be vital for migratory birds, despite its small size. Once the wetlands have been restored, more than half the migratory species of birds in North America will once again find Port Clinton’s wetlands has very suitable stopover habitat.

That has been evident in recent years during the Black Swamp Bird Observatory’s Biggest Week in American Birding, a week-long birding extravaganza that now lures more than 100,000 birders to Ottawa County and Northwest Ohio wetland habitat in early May.