Lakeside 120 brings bicyclists together for a grand ride 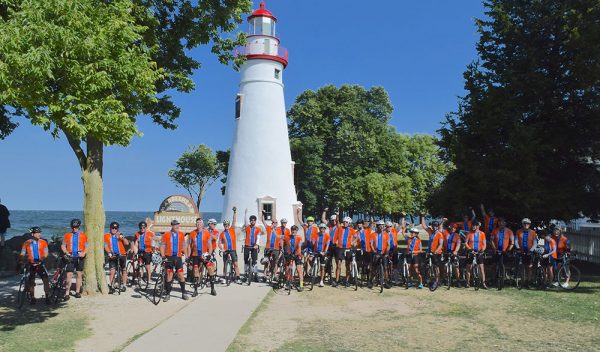 About 40 bike riders made the journey from Delaware, Ohio to Lakeside last Thursday in the Lakeside 120, an adventure that included a group photograph in front of the picturesque Marblehead Lighthouse. (Photos by D’Arcy Egan)

Bucking headwinds and some long, lonesome roads along the way, a group of hardy bicyclists became acquainted with the Lakeside Chautauqua spirit last Thursday by pedaling more than 120 miles to a rousing reception on the Lake Erie shoreline.

Sean Gill and Brian White, longtime biking friends, were brainstorming one day and thought of a way to introduce people to their favorite community. Both are Lakesiders, and Gill’s grandfather’s grandfather, Samuel Richard Gill, was one of the original founders of Lakeside in the late 1800s.

With their Lakeside 120 shirts, they were quite a sight as they headed north. And the journey, said one biker, was actually a daunting 121.5 miles. They rolled into the parking lot of the Marblehead Lighthouse right on schedule at about 5 p.m.

“The toughest stretch was between the towns of Republic and Castalia,” said Gill. “We ran into 15 mile per hour headwinds, and that took the starch out of you.”

The gang of bikers looked forward to the many stops for ice cold drinks and snacks. Brian White’s wife, Rebecca, and Sean Gill’s wife, Alison, had a squad of other wives and volunteers waiting at the rest stops.

“It took quite a bit of planning,” said Gill. “We needed an escort across the Sandusky Bay Bridge, and the Ottawa County Sheriff’s Department graciously provided it.” 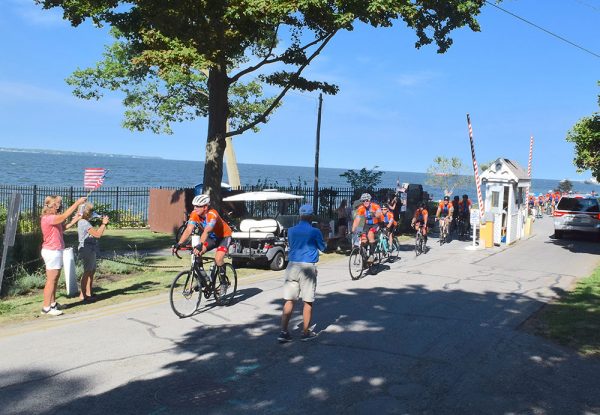 A crowd of Lakesiders were on hand at the East Gate of the community last Thursday to cheer on hardy bicyclists in the Lakeside 120, an adventure that covered 120 miles and took 10 hours to complete.

For some of the hard-core bicyclists, it was a chance to have their own Pelotonia Ride, a massive weekend of bicycling that began in 2008. The Pelotonia Ride has raised $214 million for innovative cancer research at The James at The Ohio State University Comprehensive Cancer Center in Columbus.

The Pelotonia Ride had been cancelled for this year, but a new participation platform allowed participants to set individual fundraising goals, including riding in the Lakeside 120.

A member of Port Clinton High School’s Class of 1987, and an elementary school teacher in the Worthington, Ohio area, Gill’s family has been an integral part of Lakeside for more than a century. Gill Road in Port Clinton was named after Samuel Richard Gill, and William Gill was one of the first Ottawa County commissioners.