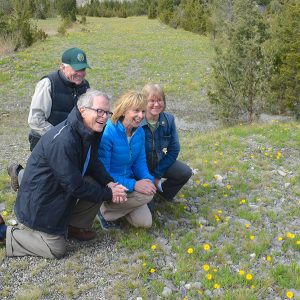 The Lakeside Daisies were in bloom this week, delighting a surprisingly large crowd at the small quarry area in Marblehead. The yellow blossoms prefer the hardscrabble limestone landscape in order to thrive, which is dominated by the active LafargeHolcim quarry on the Lakeside Marblehead Peninsula.

Gov. Mike DeWine and his wife, Fran, had their own connection to the field of yellow flowers that bloom most brightly during the month of May, the only time when visitors can tour the Lakeside Daisy State Nature Preserve without a permit.

“Our son, John, is a botanist and once studied the Lakeside Daisy here at the preserve,” said DeWine, who was happy to sign off on the major expansion of the preserve from a meager 19 acres to a more robust 137 acres.

The importance of the little piece of land at 309 Alexander Pike in Marblehead was evident by the roll call at the event. Making an appearance was Charlie Wooley, Regional Director and Deputy Regional Director for the Midwest Region of the U.S. Fish and Wildlife Service, Marblehead Mayor Jackie Bird, Ottawa County Commissioners Mark Stahl, Mark Coppeler and Don Douglas, a gaggle of Ohio Department of Natural Resources top officials, and a caravan of media from around the region.

“Adding over 100 acres to this state nature preserve will help protect an estimated 700,000 Lakeside Daisy plants,” said DeWine. “This is an investment in Ohio’s public lands not only for us today, but for future generations, as well.”

“This purchase is one example of how people’s state income tax refund donations have benefited Ohio’s state nature preserves,” said Mary Mertz, director of the Ohio Department of Natural Resources.

The Lakeside Daisy, said ODNR officials, is the rarest of plants currently listed in Ohio. Because of the preserve’s small size, in recent years the DNAP and other conservation groups have established a population of the flowers on Kelleys Island.

The expanded Lakeside Daisy Preserve also now includes a section of the glacial grooves hidden on the peninsula, eagles nests, and a resting area for migrating waterfowl.