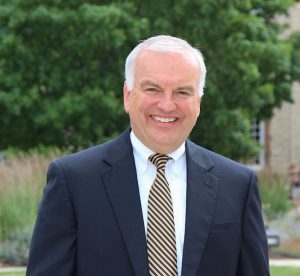 Greenhill has served on the Lakeside Association Board since 2019. He brings eight years of experience to the position as an Upper Arlington, Ohio City Council member.

During his time on the city council, he successfully advocated for community outreach in developing plans for parks and recreational facilities, solid waste collection, and 911 emergency calls, identifying efficiencies in all aspects of operations planning for underdeveloped areas of the city.

“Katy and I are so fortunate to be part of a community with such a rich cultural, historic and religious heritage,” said Greenhill.  “I look forward to working closely with Lakeside homeowners, staff, guests and the Lakeside Association and Foundation Boards as we conclude a successful 2021 season and plan for an exceptional 2022 season.”

Bob Grimm, Lakeside Association Board chair, said that the “Association Board is delighted to welcome Kip as Lakeside’s acting president and CEO.  We are confident that his leadership will support our Lakeside community and staff, and we look forward to working with Kip.”

Greenhill’s resignation from the Lakeside Association Board, and his new role as acting president and CEO of the Lakeside Association and Lakeside Foundation, are effective immediately. Plans are also being finalized for several meet and greet receptions beginning Monday, Sept. 6, in Lakeside, and for the broader Lakeside Marblehead community during the Lighthouse Festival on Saturday, Oct. 9.