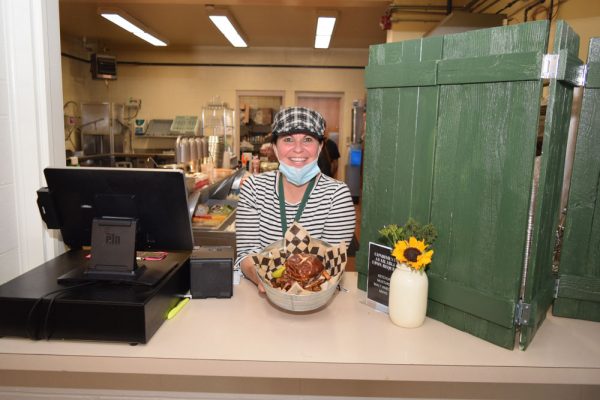 Chef Stacy Maple of Lakeside delivers one of her gourmet cheeseburgers and fries at the Slack House and Historic Cafe. The new restaurant in Lakeside Chautauqua is the first to be open year round for visitors of the historic resort. (Photo by D’Arcy Patrick Egan)

The gates are open for the winter, and Lakeside Chautaqua is welcoming visitors to experience the Victorian-era resort on the Lake Erie resort on the Marblehead Peninsula.

CEO and President Daniel Rogers has teamed with Chef Maple to make the resort a year-round attraction, keeping The Fountain Inn open throughout the winter, and helping noted Chef Stacy Maple to create the Slack House Historic Cafe.

“The Slack House is featuring Burger Buckets, Lake Erie perch sandwiches, milk shakes and a lot more,” said Maple, whose family had a Lakeside home. She has excelled as a chef at other venues, including the pay-it-forward Bistro 163 in Port Clinton, a four-star restaurant.

Maple and Rogers dove into the history of Lakeside to name the restaurant. She discovered the building, which is a part of The Fountain Inn, was called the Slack House from 1891 to 1961.

To help lure visitors to Lakeside, outsiders are welcome to wander the streets and enjoy the lake Erie shoreline without paying an admission fee, as in summer.

That’s not to say it has not been a popular location for many. The late-season walleye fishing while casting from the Lakeside Pier has grown popular in recent years, and anglers come from far and wide to catch trophy walleye.

“We want to have people from around the region visit in winter,” said Maple. “We have four seasons here, they’re all beautiful in their own way, so why go home? This is a great place to enjoy all year round.”

Maple said Rogers has been the driving force to make it all happen. 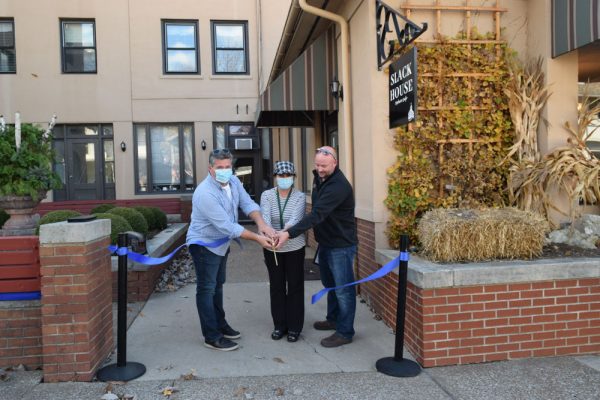 Lakeside Chautauqua officially opened its new Slack House Historic Cafe recently. Cutting the ribbon in front of the cafe and The Fountain Inn are CEO and President Daniel Rogers of Lakeside Chautaqua, Chef Stacy Maple of the Slack House and Andy Scholtterer of Bayside Comfort Inc., president of the Marblehead Peninsula Chamber of Commerce. (Photo by D’Arcy Patrick Egan)

“Daniel Rogers rang the ball that Lakeside wants to be a year round community,” said Maple. “He recognized that I’m a chef by trade, and began last summer to wonder what to do with me when fall and winter arrived, and I didn’t have much to do.”

The Slack House, which had contained offices, meeting rooms and a small cafeteria over the years at 236 Walnut Ave., had languished, despite being a short walk from the Lakeside Hotel and the Lakeside Pier.

While burgers such as the Quarryman and Slack House burgers are in the spotlight, Maple’s crew offers custom fries, Maple’s “over the top” milk shakes with cookies, cake and candy, Lake Erie perch sandwiches and salads, and vegan and vegetarian delights.

The Slack House will be open from 7 a.m. for coffee and pastries, and until 11 p.m. for late sandwiches and snacks.

Some of the profits, said Maple, will support environmental causes.

Rogers said there will be a few special events in winter, including a Christmas Festival on Dec. 5 and an ice-sculpting event some time in January.

“With no fee required to enter Lakeside by car or on foot during from late fall through early spring, we welcome local folks and visitors from far away,” said Maple. “It really doesn’t matter what time of year you visit Lakeside Chautauqua, its location along the Lake Erie shoreline and with all of our Victorian housing, it is a beautiful place for friends and family to stroll.”