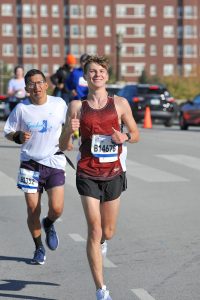 Christian Maple, 20, of Lakeside-Marblehead wins a recent race. The young athlete who competed in cross country for Sandusky St. Mary School will tackle the Ironman Marathon that begins Sunday morning at the Jackson Street Pier in Sandusky.

The Ironman Marathon is a rigorous race that includes swimming, bicycling and running on Sunday, July 24, and Christian Maple, 20, of Lakeside-Marblehead will be a local favorite after recovering from a horrendous car crash in January 2020 that nearly took the lives of Maple and his girlfriend, Maria Rodriguez.

“It was a terrible accident,” said Maple. “Maria and I were in the car and another vehicle hit us head-on on Route 2, near the Sandusky Bay Bridge in our area,” he said. Maple, a cross country runner at Sandusky St. Marys School, crawled from the wreckage with severely injured ankle and other broken bones, requiring surgeries and titanium to put him back together.

But Maple loved running, and as a last hurrah before heading off to Bowling Green State University, where Rodriguez is a senior now, he decided to compete this Sunday’s Ironman, one of many held at locations around the world.

“The Ironman being held in Sandusky on Sunday starts with a 1/2-mile swim, jumping off the Kelleys Island Ferry in Sandusky Harbor,” said Maple. “Then it’s a 56-mile bike ride, and wraps up with a half-marathon 13.1-mile run.”

Maple has competed in half-marathons in the past, and knows how rigorous the entire competition on Sunday will be for him.

“I competed in a half-marathon in Indiana, and there was plenty of pain,” he said, but an amazing challenge for him and his reconstructed body. His lungs wanted to quit, and his repaired legs, as well.

“The biggest challenge on Sunday will be to keep hydrated through the race,” he said. “I’ve really been looking forward to the Ironman. We go from swimming to bicycling down to about Bellevue, Ohio, and I have really enjoyed the bicycling most in training.”

Maple said the first day he was allowed to run again after the highway crash he was told to expect pain. Because of the challenge, he said his cross country times that year were his best ever.

Maple’s mother, Stacey, is an award-winning chef and his father, Criss Maple, is President of ARMORVIEW Home Exteriors. He has a younger brother, Nolton, 16.

“There’s a lot of pain in training for an Ironman,” said Maple, whose fellow cross country runners are still his best friends. He credited Cross Country Coach Ronald Leech to help foster his running success, and Assistant Coach Perry Fraylick.