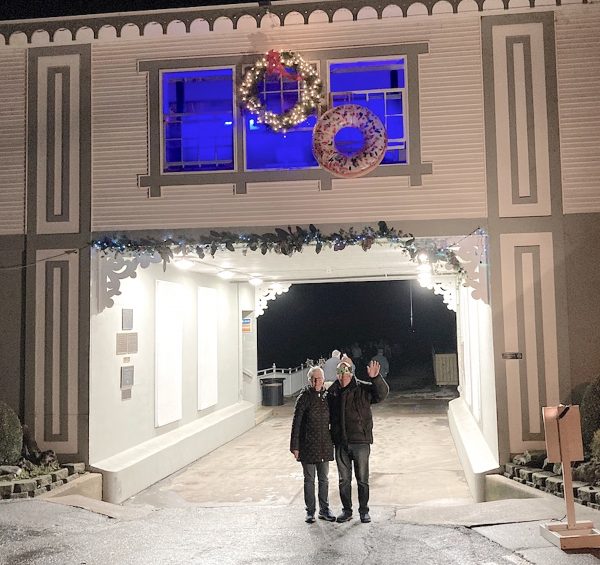 Ron and Carol Rinehart celebrate New Year’s Eve during the 2021 Lakeside Donut Drop. The couple created the Donut Drop on a whim in 2019, and they’re expecting another crowd this New Year’s Eve.

Lakeside residents Ron and Carol Rinehart learned that their friends were running late, preventing the couples from attending Port Clinton’s New Year’s Eve countdown in 2019. So they decided to create an impromptu event.

“We couldn’t make it to Port Clinton in time, so we had our own Donut Drop,” Carol said. “My husband rigged up a bag of doughnuts on a fishing pole, and we went down to the Lakeside dock and dropped the first doughnut of the year.”

They had so much fun with the idea that they planned to invite the public and repeat it in 2020, but COVID-19 curfew rules forced them to cancel their plans. By New Year’s Eve 2021, word had spread about the Donut Drop, and close to 300 people showed up.

At the end of summer 2021, the Rineharts purchased a few dozen doughnuts from the Patio Restaurant before it closed for the winter, froze the doughnuts, and served them at the 2021 Donut Drop.

This New Year’s Eve, the Rineharts will host the biggest Donut Drop yet. DJ Sean Gill will provide music for dancing while guests wait for Ron Rinehart to drop a giant inflatable donut at midnight.

The Donut Drop will be held at the Lakeside Pavilion and will begin at 11 p.m. Cost is free, and there is no gate fee to enter Lakeside. Doughnuts are free, compliments of the Rineharts and the Patio Restaurant.

“Sean Gill is just wonderful, and he’s donating his time,” Carol said. “We have 14 dozen donuts waiting in the freezer.”

Religious Life & Pastoral Care, will pray a blessing over the New Year during the event.

For those wishing to spend the night in Lakeside, the Fountain Inn is offering a Lakeside Christmas Hotel Package with a standard room rate starting at $89. Reservations can be made at 419-798-4461, Ext. 230.

“I think a lot of people came because Lakeside is generally family-oriented, and they knew the event would be fun for families,” Carol said. “And people love the doughnuts at the Patio. They came because they can’t get them in winter.”