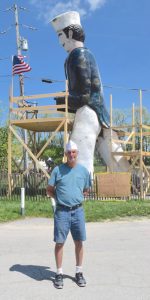 Mike Cahill is a little-bitty guy, compared to his reconstruction project partner, Jacques, who Cahill is slowing bringing back to respectability in Marblehead. (Photo by D’Arcy Patrick Egan)

The scaffolding is up, and Mike Cahill was bracing himself against the typical spring winds of Marblehead. Cahill is no stranger to work platforms, finding success on the Marblehead Peninsula a few years ago as a restoration contractor.

“I owned Professional Homes & Offices, and built or renovated quite a few places around here,” said Cahill. Now it’s Jacques and me. He’s my legacy.”

If you live in Marblehead, Jacques is someone you probably know. You might have seen him a hundred times. He’s the huge dude with the white hat and pants and black jacket who stands tall next to the Mickey Mart Gas Station sign on East Harbor Road.

Yeah, that guy. The 30-foot tall guy with no hands!

Cahill has made that his mission in life. Cahill wants to spruce Jacques up so he is the slick and sassy salesman he once was.

Jacques was famous in Marion, Ohio about 60 years ago, standing tall along the highway, teasing hungry travelers passing by on the highway to stop at a popular local restaurant for the beef-on-a-bun sandwich.

That was in the 1960s. Jacques was was cut loose in the 1970s with no place to call home. He was moved to Danbury Township by local resident Dave Young of Young’s RV Center in Fremont. Young owns a gravel lot next to the Mickey Mart, and plopped old Jacques down there to keep an eye on the busy vacation traffic.

Jacques became a local fixture, much beloved by those who motored past the unique giant. That included Cahill, who enjoyed camping along the Lake Erie shoreline and working as a restoration contractor in the Marblehead area.

“I had to move to Venice, Fla., a few years ago to take care of family,” he said. “I’d made so many Marblehead friends, people I’d done work for, and I missed Jacques, too.”

Jacques continued to languish. The tray he once held and his hands were falling apart. Some haphazard fiberglass repairs were sloppy done and paint had chipped away.

But Jacques’s popularity never faltered. Many stopped to check him out. A local artist who had a Marblehead art gallery, Bailey VanKirk, captured Jacques’ sodden glory in a vivid oil painting. It sold, and fans clamored for prints and postcards of Jacques. 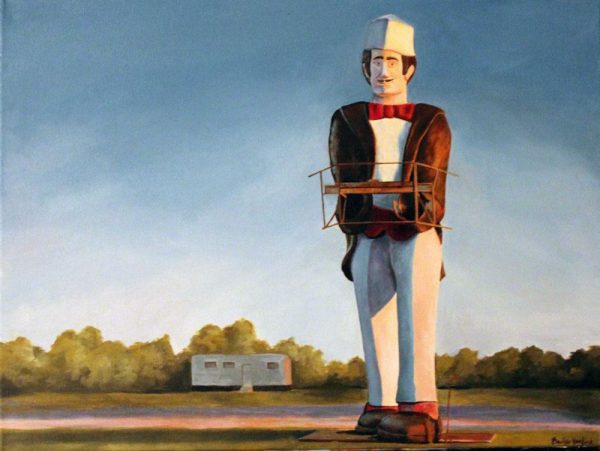 Helping to make Jacques a popular guy on the Marblehead peninsula was this oil painting by local artist Bailey VanKirk, which spawned a bevy of prints and postcards.

(Disclaimer: Bailey Van Kirk is my daughter, and accepts commissions.)

Cahill is back in Marblehead this summer, and is determined to give back to a community that had been so good to him. Young has promised a long-term home for Jacques, and Cahill has a three-prong plan to clean up Jacques and fashion some nifty hands for him. Cahill needs funding and volunteers, so President Carol Morgan and publicist Jesse Denton of the Greater Port Clinton Area Arts Council, perhaps prodded by the success of The Arts Garage in downtown Port Clinton, felt Jacque should be considered as unique art.

The kicker was that Cahill wasn’t trying to make money. He wanted to reward his friendships in the area with a smiling Jacques.

“The GPCAAC is handling the donations, which is half of the battle,” said Cahill. “The other half is getting some volunteer help. It’s pretty lonely up on that scaffold.”

“If anyone can do it, Mike is the one,” said Allen Ladd of Marblehead, one of Cahill’s satisfied customers from his contracting days in Marblehead. “He’s got to focus on working on Jacques in spring and fall, because the tourist traffic around here in the summer is brutal.”

The project will be three-phased, starting with repairs and painting, and replacing Jacque’s hands. Next will be to install a base and small lighthouse. Last, but certainly not least, is solar LED lighting.

“It’s going to take money, volunteers and time,” said Cahill. “But Jacques is a local landmark, and I want to leave my mark, too, right here on East Harbor Road.”

To keep an eye on Cahill’s quest, or donate to the cause, visit gpcaac.org. Volunteers can email Cahill (restorejacques.cros.net).