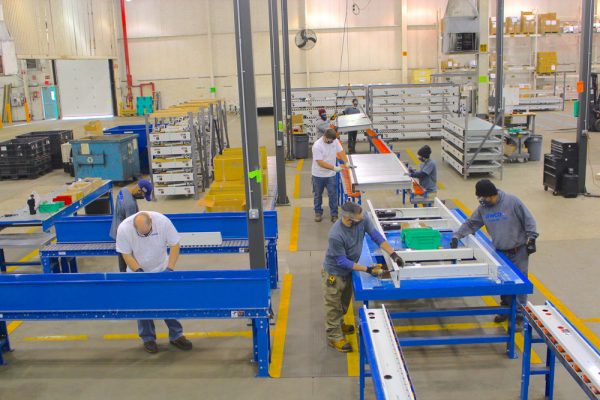 LEWCO, Inc., a world-class manufacturer of industrial ovens and unit handling conveyors, will take over a large portion of a historical facility in the Lake Erie Business Park.

A well-established Northwest Ohio manufacturing company has announced plans to expand its operations into Ottawa County. LEWCO, Inc., recognized as a world-class manufacturer of industrial ovens and unit handling conveyors, will take over a large portion of a historical facility in the Lake Erie Business Park.

The company will invest nearly $12 million and create 163 new positions to support its significant growth being driven by e-commerce. With offers made to expand outside Ohio, the business chose instead to reaffirm its commitment to the region by investing and revitalizing an older structure in Port Clinton.

“Although there was pressure from outside of Ohio, it was important to our team and families that the rapidly growing business expansion stay here in Ohio and specifically in our region,” said Ron Guerra, President, of LEWCO Inc. “We greatly appreciate JobsOhio and Ottawa County’s efforts to help make that a reality.”

LEWCO has a long history in Northwest Ohio, originally founded in Sandusky as the Ohio Welding Company in 1917. Maintaining its headquarters in Sandusky, the company now employs 168 people, prior to this scheduled expansion.

The company is moving into a 756,000 square-foot structure which has a long history going back more than 75 years. It was built in 1942 by the U.S. Army and served as the Erie Army Ordinance Depot during and after World War II. Throughout that time, tanks and other large military equipment were brought there by railroad to be serviced and repaired. Since being sold by the federal government to private investors, the building has served as the home to several businesses almost exclusively in the manufacturing sector. JobsOhio has provided substantial support toward the project with grants to help offset revitalization and renovation of the building, as well as dollars for new machinery and equipment.

Revitalization of the building is expected to be completed sometime near mid-2021.

“JobsOhio has developed aggressive, business-friendly programs to support corporate growth and investment as well as dynamic programs to help communities rejuvenate sites,” said Dean Monske, president and CEO of the Regional Growth Partnership. “As the Northwest Ohio network partner for JobsOhio, we are pleased to work in collaboration with the Ottawa County Improvement Corporation in facilitating this expansion for LEWCO.

The company also received approval for a Job Creation Tax Credit from the Ohio Tax Credit Authority under the Ohio Development Services Agency.

Manufacturing continues to serve as an economic driver for Northwest Ohio, with businesses investing nearly $84 million into operations and creating almost 900 new jobs in just third quarter. And the Ottawa County region has a robust manufacturing base, with companies representing such diverse fields as advanced materials, polymers and advanced manufacturing.

“We are excited to be a part of this new project and the jobs it will create here in Ottawa County,” said Director Chris Singerling of the Ottawa County Improvement Corporation. “This is one more great example of what happens when a committed local business works with regional partners to achieve the mutually beneficial goals of job creation and business expansion here in Ohio.”

The announcement was a feather in the cap for JobsOhio and OCIC.

“This is the first time JobsOhio has provided this size of an incentive package to a business coming to Ottawa County,” said Singerling, who took over the reins of OCIC last June. “We know Ottawa County and the Greater Port Clinton area is a very attractive place for companies.”

Port Clinton Mayor Mike Snider used to play on the grounds of the Lake Erie Business Park many years ago, when his grandfather was an engineer at the facility.

“It’s simply more proof that the Greater Port Clinton area is a great place to live, work and play, something we’ve all known for generations,” said Snider. “The lifestyle around here is unbeatable, and this is an example of others looking to our community and realizing its potential to attract quality employees who want to share in our outstanding lifestyle.”

Snider pointed to downtown renovations that have made Port Clinton a more progressive, attractive city have been well worth the time and money. There has been a new interest in the port town from restaurants, pubs and retailers.

“Having LEWCO in nearby Lake Erie Industrial Park will significantly contribute to a strong economic climate for Oak Harbor residents,” said Oak Harbor Mayor Quinton Babcock. “We commend LEWCO for choosing to reaffirm its commitment to Northwest Ohio and thank JobsOhio, the Ottawa County Improvement Corporation and the Regional Growth Partnership for helping make this economic opportunity a reality.”

State Rep. D.J. Swearingen said that “even during this pandemic, it’s promising to see Ottawa County remains competitive in manufacturing and expanding on business in order to bring new jobs to this region.”