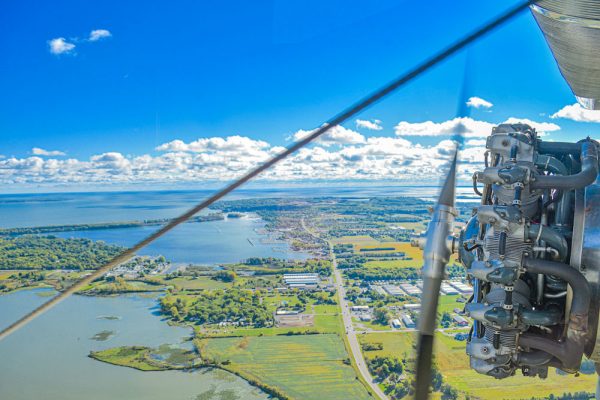 The propeller on one of the Ford Tri-Motor’s three engines spins above the Port Clinton landscape. (Photo by Sheri Trusty)

Liberty Aviation Museum gave visitors historic trips around Port Clinton recently as it offered sightseeing rides aboard the 1928 Ford Tri-Motor “City of Wichita/City of Port Clinton.” The plane was part of the Transcontinental Air Transport (TAT) airline that offered the first rapid, coast-to-coast trips through a collaboration with the railroad system. In the mix of this new era of aviation were famed aviators Charles Lindbergh and Amelia Earhart, who held positions with TAT.

On July 7, 1929, the inaugural TAT trip began as passengers boarded a train at New York City’s Pennsylvania Station. The train traveled to Columbus where the passengers transferred to a Ford Tri-Motor for the next leg of the trip. Forty-eight hours after leaving New York City, the passengers arrived in Los Angeles. TAT had now cut the time for cross-country travel in half.

Modern travelers experienced a glimpse of that historic trip when they boarded the “City of Wichita/City of Port Clinton” recently at Liberty Aviation Museum. Like TAT’s first Ford Tri-Motor travelers, the museum riders stepped into a narrow, wood-paneled corridor where every seat was a window seat. As they flew, they peered at the Port Clinton landscape through curtained windows set below individual reading lights. Passengers of the 1929 flight also had access to personal, electric cigarette lighters with accompanying ashtrays. 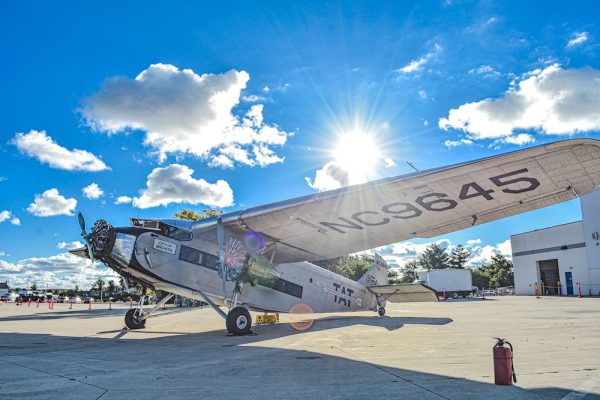 Riders on Friday’s first morning flight in Port Clinton enjoyed an extended wait in the plane before takeoff as volunteer pilot John Maxfield prepared the plane and its three engines for flight.

“We wake it up more than we start it up,” Maxfield said. “It has three engines with three different personalities.”

Among the riders on Friday’s flight were Stewart Fowler, a museum volunteer from North Olmsted, and his granddaughter, Christina Pawlowski of Avon Lake.

“I loved it, every second of it,” Pawlowski said.

Stewart, who paid an extra fee for the privilege of riding in the cockpit with Maxfield, said he was surprised at how comfortable the flight was for passengers. 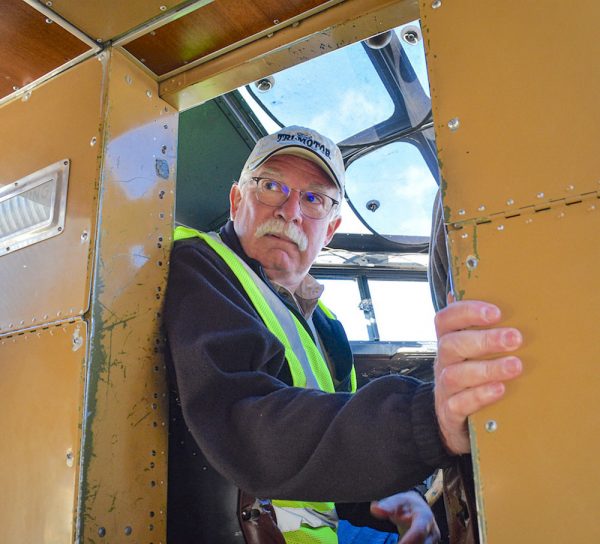 Volunteer pilot John Maxfield checks on his passengers before taking off on the first flight Friday morning. The riders enjoyed an extended wait on the runway as Maxfield allowed the plane’s three engines to warm up for flight. (Photo by Sheri Trusty)

“It was awesome. I was really surprised at how smooth it was,” Fowler said.

Maxfield is a commercial pilot who has been volunteering for about 10 years. He said stepping into the cockpit of a Ford Tri-Motor is very different from flying a jet.

“They are totally, diametrically opposite,” Maxfield said. “This is the difference from being in a brand-new limousine and getting into a Model T where everything is manual.”

Maxfield said the “City of Wichita/City of Port Clinton” was retired from TAT “when faster, bigger airplanes came along. This plane went south of the border and flew for other airlines and then was brought back to the U.S. and restored,” he said.