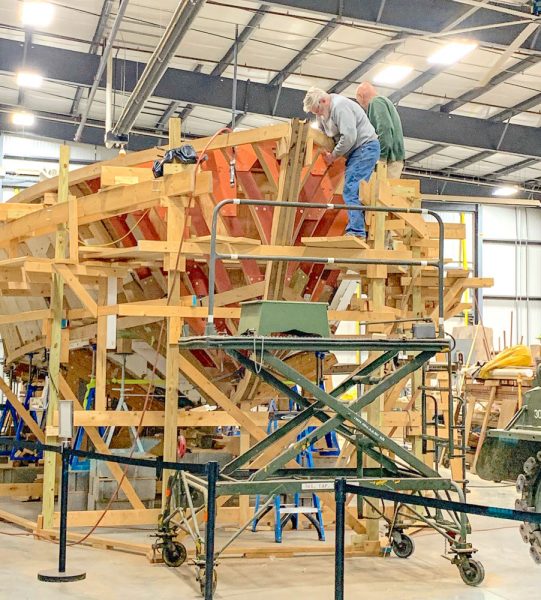 Each week, about a dozen skilled volunteers head to Liberty Aviation Museum’s back hangar to recreate history. They come from varied backgrounds and offer unique skills, but they have a common goal. Together, they are bringing a patrol torpedo (PT) boat back to life.

The restoration is led by Project Manager Mark White of Sandusky, the only paid worker, who has been subcontracted to help build the World War II Vosper PT-728. The project is seven years in and about halfway finished.

Patrol torpedo (PT) boats were Navy boats used to engage enemy vessels. They were valued for their speed and maneuverability and were armed with four, 21-inch Mark 8 torpedoes. 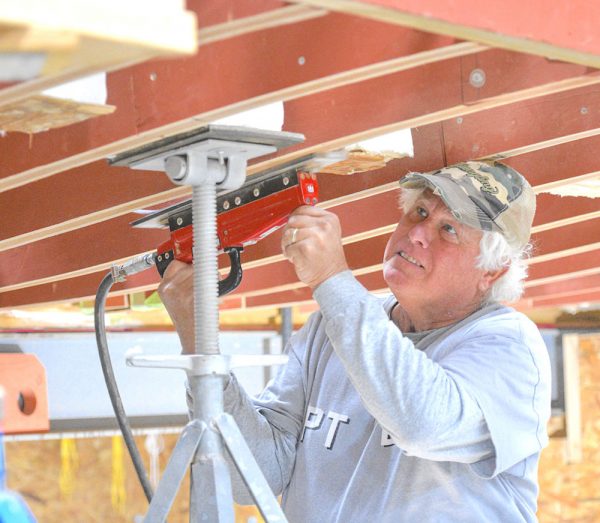 Volunteer Don Herman has built miniature, replica sailboats, but working on the PT boat at Liberty Aviation Museum is, he said, on another level. (Photo by Sheri Trusty) 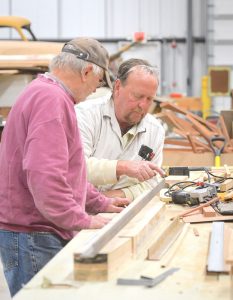 Project Manager Mark White, right, said his job on the PT boat restoration project has evolved into teacher as he leads a team of about a dozen volunteers. Here, he works with volunteer Jim Stribrny. (Photo by Sheri Trusty)

“It was built in 1945 which, of course, was the end of the war,” White said. “Most of the PT boats in the theater were destroyed. The Navy didn’t want the liability of bringing them back, so they were burned or dismantled.”

Once Liberty’s PT boat is completed, it will become part of a living history experience for museum guests.

“The plan is to give people rides so they can experience what it was like,” White said.

But first, White and his team of volunteers have a lot of work to do.

“It’s primarily woodworking right now,” said Paul Kalister of Lorain, who formerly owned a wooden garage door business and brings those woodworking skills to the project. “We’ll eventually get into the mechanics, and I anticipate a lot of painting.”

White said each volunteer brings unique talents into the hangar. His is a long history of restoration work.

“Everyone that comes here has a different skill. We have guys who worked in machine shops and fabrication shops and who wore white shirts in an office,” he said. “My job has evolved into teacher. I try to adapt their skills to the project and teach them the craft of wooden boat restoration.”

Jim Russell of Marblehead brought metalworking skills to the project when he recently joined the volunteer crew, and volunteer Jim Stribrny of Toledo is a retired toolmaker and machinist who also has experience with woodworking.

“I’m a 50-year metal butcher,” he said. “I sail summer and winter. I’m an iceboater. I come here one or two days a week. It lets you be able to use the skills you learned over the years.” 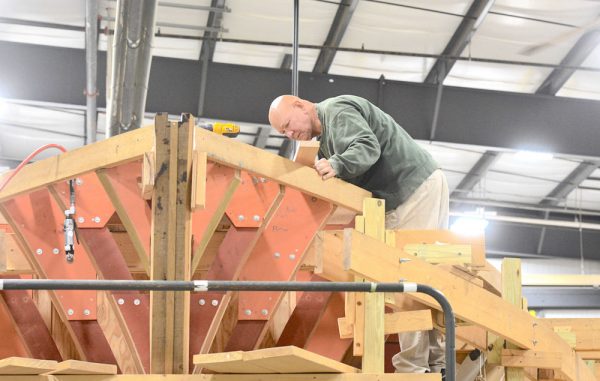 Volunteer Paul Kalister puts his woodworking skills to use on the bow of the PT boat under restoration at Liberty Aviation Museum. (Photo by Sheri Trusty)

Don Herman, who lives in Port Clinton and Bucyrus, built several few-feet-long boat replicas, including a replica of a PT boat.

“Building ships was always in my wheelhouse, but not at this level,” he said. “I told them I’d love to help. Being a volunteer is a labor of love.”

Ron Kolling of Toledo, a Navy veteran, has built sailboats in the past. He said that, although the volunteers have different strengths, they each help however they can.

“I mostly do woodworking, but we’re a small group, so everyone does a little bit of everything,” he said. “I enjoy it. I wouldn’t come up here if I didn’t.”