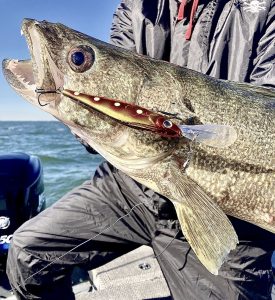 Lake Erie is cooling down this week, and the walleye bite is heating up. Frank Kovach hooked and landed this trophy walleye while trolling a Walleye National Creations Gold Digger Reaper lures in 46 feet of water off Huron. (Photo by Art Panfil)

Colder Lake Erie temperatures and plenty of wind brought the fishing back this week. We have seen much better fishing in recent days than we have in the weeks since the weather got cooler, but with little wind. This week brought limits of both yellow perch and walleye.

Let’s start with the yellow perch. Limits of perch were being caught all along the Port Clinton shoreline from Sand Road all the way down past the Portage River. The magic depths this week seemed to be around 18 feet. Most perch fishing reports were rock related off Port Clinton and Perry’s Monument.

Although 18-foot depths worked well, perch were hanging around 24 feet of water, as well. Shiner minnows have been hard to find, but “goldies” worked this week. Fall winds made the difference. One day we have winds out of the Southwest and within a day or two the winds were out of the Northeast. Through it all though, the Port Clinton area was able to hold up with great fishing.

This week’s weather also helped to catch limits of walleye. One day we had casters getting limits off of Kelleys Island Shoal while those trolling were catching them around the Huron dumping grounds and the islands. Casters chose to continue to cast Weapon lures with a ¾-ounce sinker in 10 to 20 feet of water on rock piles, while trollers used Bandit diving plugs with no weight and set 80 to 100 feet back.

October should give us the best fishing of the year, but that will be dictated by the winds. It is good to see both perch and walleye moving closer to the shore now, making it easier to catch them as the Fall season continues.

Both perch fishing and casting for walleye will probably be found either on or near structure and trolling for walleye will be out in the mud bottoms. At Bay’s Edge, the crew is hoping you have a good week as the temperatures start to cool, and be safe on the water.