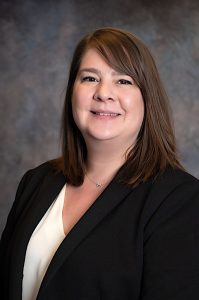 “Lindsey’s legal experience certainly proves her qualified to fill the role of Vice President – Chief Compliance Officer,” said Martin P. Sutter, GenoaBank President and CEO. “I am pleased to have Lindsey aboard. Her talents will be a great benefit for our growing community bank, as the bank continues to expand product and service offerings for our customers.”

Milam will be responsible for overseeing the bank’s compliance, security and audit departments.

Milam, a native of Genoa, earned her Bachelor of Arts in International Relations from the University of Toledo and her Juris Doctor from the University of Toledo College of Law. Milam began her legal career with a law firm in Bloomfield Hills, Mich., where she practiced for several years in the field of commercial and residential real estate development. Milam continued her practice with the Toledo-based law firm of Shumaker, Loop & Kendrick, where she focused mainly on large acquisitions and dispositions of real estate for a national real estate investment trust.

Most recently, Milam managed operations for Chicago Title Company in the Columbus, Dayton and Cincinnati markets. She is a member of the Ohio, Michigan, Toledo and American Bar Associations. Milam currently resides in Ida, Mich. with her husband, Tom.

GenoaBank, founded in 1902, is now in its second century of providing a broad range of banking services to business and private customers in Ottawa, Lucas, Wood and Sandusky counties.