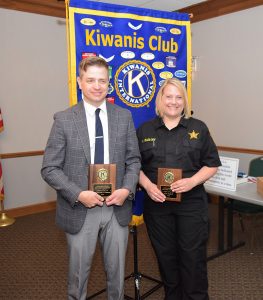 Detective Ron Timmons of the Port Clinton Police Department and Deputy Lisa Radloff of the Ottawa County Sheriff’s Department were named the Officers of the Year by the Kiwanis Club of Port Clinton last week. (Photo by D’Arcy Egan)

Radloff’s dream job, though, was to work for the Sheriff’s Department. When she applied to become a dispatcher, she didn’t get the job. But she did impress the sheriff.

“From her work at Ala Carte Cafe to her promise to work hard and challenge herself if hired here, Lisa certainly made an impression,” said Sheriff Stephen Levorchick. “When we had a opening at the jail in 2018, she got a call. It was one of the best hires the department has made.”

Radloff has shown the work ethic and desire to be a success, and last week was named the Ottawa County Sheriff Department’s Officer of the Year by the Kiwanis Club of Port Clinton at its annual Law Enforcement Day luncheon at the Elks Lodge.

“Every time I go into work, my motto is ‘Try to leave things better than I found them,” said Radloff.

“Deputy Radloff is determined to do her job to her fullest potential and follows through with the task at hand,” said a statement by the department. “Her positive attitude brings camaraderie among fellow deputies and she is always willing to assist her co-workers.”

Timmons was nominated by his fellow officers in the Port Clinton Police Department this year for his tireless efforts during a 23-day search last December and January for a missing child, Harley Dilly, of Port Clinton. It was a heart-breaking saga, one that drained Chief Rob Hickman and the entire department before Dilly was found dead in a local vacant house after accidentally being trapped in a chimney.

Hickman praised Timmons for his dedication to the investigation, and the many hours and days, often around the clock, spent investigating Dilly’s disappearance.

“Although the outcome was not what any of us wanted, the family was able to have closure and Ron was a huge part of that,” said Hickman.