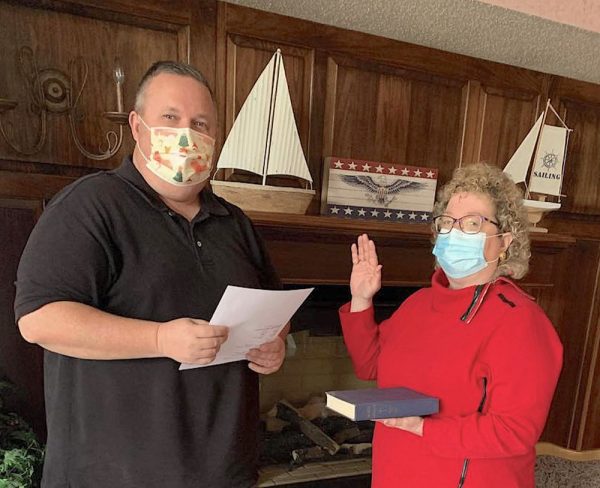 After working for the National Park Service for more than 32 years, Port Clinton native Lisa Slobodzian has returned home and was recently appointed to the vacant Ward Two seat on Port Clinton City Council. She was sworn in by Mayor Mike Snider.

A member of the Port Clinton High School’s Class of 1983, Slobodzian recently accepted an appointment by the Ottawa County Republican Party to fill the vacant Ward Two term on Port Clinton City Council. She replaces Brian Hild, who resigned on Monday, Dec. 7, after deciding to move his family out of Ward Two.

“Having family in Port Clinton brought me back to the area,” said Slobodzian. “Although I’d been away for 32 years, working for the National Park Service, and have enjoyed a lot of pretty places to work, I realized after retiring that Port Clinton wasn’t such a bad place to be,” she said, with a laugh.

“I really like the four seasons here, and being by the water. The Great Smoky Mountains National Park is a wonderful place, but I thoroughly enjoyed being able to take trips to the ocean, and to come home to Port Clinton for the holidays.”

Slobodzian began her park service career as a District Park Ranger, North Carolina Operations, in Great Smoky Mountains National Park. During her last 12 years, she was a Law Enforcement Specialist with the parks on both the North Caroline and Tennessee sides of the sprawling 187,000 acres of the park’s forested peaks, scenic views and recreation.

Slobodzian remembers her days growing up in Port Clinton, and is looking forward to helping with the city’s modern revitalization.

“I’ve never been in a political position before,” she emphasized, “but I feel this is something I needed to do at this time of my life. I feel that I can be of service to the City of Port Clinton, representing Ward Two and the entire city, and giving people a voice. I want everyone to know that I’m here for them,” she said.

Slobodzian feels her background in law enforcement with the National Park Service will help her a great deal.

“I have had experience in dealing with all types of people while working for the park service, especially in the field and on patrol,” she said. “You’re always dealing with issues, from the U.S. Attorneys Office in Knoxville, Tenn., to problems generated in the park.

“I think I can sit down with both sides when issues arise, and work things out. I’m familiar with taking everyone’s point of view into consideration before making decisions.”

Ward Two can be challenging. It includes Port Clinton’s downtown area, including the Lake Erie shoreline just west of the Portage River, and extends from Lake Erie southward to the city limits along State Route 2.

Slobodzian attended Hocking Technical College in Nelsonville, Ohio after high school. Hocking is noted for its courses in park management, fisheries and wildlife, developing a wide range of officers over the years for the Ohio Department of Natural Resources. She earned an Associate of Applied Sciences degree in Recreation and Wildlife Technology, and went on to attend the National Ranger Training Program.

She also completed the Basic Police Training Program at the Federal Law Enforcement Training Center in Glynco, Ga. Her law enforcement duties with the park service took her from New York to Tennessee, Florida and Arizona, before retiring in 2018.