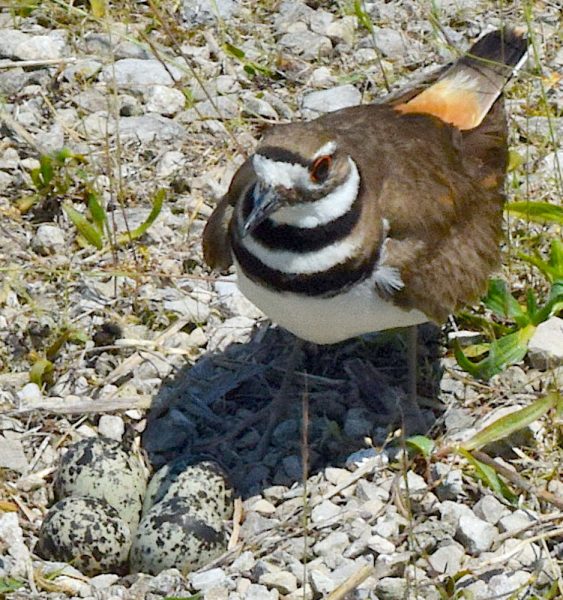 This killdeer has chosen Waterworks Park during this nesting season, selecting a patch of gravel and short grass to lay her eggs. The eggs blend well with the surrounding landscape to foil detection by predators. (Photo by D’Arcy Patrick Egan)

The Lake Erie shoreline is home for many pairs of killdeer, one of the most amusing birds you’ll find in the region.

It’s not a very colorful bird, and it doesn’t seem to mind hanging around where humans sometimes roam, such as Waterworks Park in downtown Port Clinton at this time of year. Its general nesting habitat is a field with gravel and vegetation only an inch or two high.

Killdeers are not as magnificent as our bald eagles or great horned owls, or as rare the pair of piping plovers that recently decided to nest at Maumee Bay State Park. That is something that has not happened in decades. Their habits, though, are a delight to watch.

Killdeer would much rather run than fly from interlopers that get too close to their nests. And if they’re guarding a nest and don’t believe they’ve been seen, killdeer won’t budge a feather.

If they perceive they’ve been discovered by a two-legged or four-legged predator, they have a routine worthy of watching. It’s the broken-wing ploy.

To distract a predator that might be stalking its nest, the killdeer will hop around and try to be seen, then fly a short distance in wobbly fashion before flopping to the ground as if it has a broken wing. It is all a charade to lure the predator away from its nest.

It seems uncannily real, and bird dogs, house cats and other predators are sure to fall for it.

The first time that I was exposed to this behavior was in a back yard decades ago where killdeer had established a nest and had laid a clutch of four eggs. My English setter, Ben, loved to point game birds, and decided a killdeer was a worthy quarry.

Ben went on point at the sight of the killdeer with a “broken” wing seemingly struggling a dozen yards away. Slowly, Ben tried to creep closer and closer mere inches at a time.

When just a few feet away from the pretty little bird, the killdeer magically found its ability to run and fly once again, and Ben gave chase. A dozen yards away, the killdeer began its broken-wing escapades once again, luring Ben even further away from its nest.

The dog and killdeer show went on for an hour until Ben finally realized its hopelessness.

So, if you see a killdeer at this time of year, there is probably a nest nearby. Enjoy watching the little bird from a distance, and allow its eggs time to hatch. The chicks will arrive with a full coat of buffy down feathers and a single black breast band. They will walk out of the nest as soon as their feathers dry and begin to dine on insects and earthworms and seeds.

In the early fall, killdeer are the bane of mourning dove hunters. The killdeer can often be found flying with flocks of doves and feeding in grain fields, and diving and darting in the sky as doves do to avoid a hunter’s load of shot.

The big difference for hunters is that doves are legal to harvest and are great to eat. Killdeer are not game birds, and will earn a hunter a citation if accidentally killed while hunting doves.