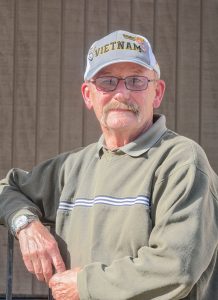 Ron Distel spent 366 days in Vietnam and a lifetime dealing with the after effects. Exposure to toxic Agent Orange damaged his heart and forced him to undergo two open heart surgeries, leaving him disabled. Exposure to the realities of war as he loaded dead soldiers onto aircraft caused a different kind of devastation to his heart. Exposure to the cruelties of an ungrateful country upon his return broke his heart and his soul.

Yet, he said he would do it all again preparing for last week’s Veteran’s Day.

“Everyone I talk to, in all my travels – we all say the same thing. We’d do it again,” Distel said. “We’ve been in another country, and we know this is the best country in the world.

“To keep that from coming to our country, we’d do it again.”

Distel, of Elmore, served in the Air Force from 1970 to 1974. He spent his first year in Vietnam working as an aircraft loading specialist. He loaded everything from petroleum to dead soldiers.

“Loading KIAs was the hardest part. I loaded a lot of KIAs – 21 one time,” he said. “One time I had to rig a full-size jet for medivac. That was a chore, but it was kind of cool seeing them get out of the country.”

Distel downplays the dangers he faced in Vietnam.

“I carried a weapon, but I didn’t see much combat. I had to duck a few times, but nothing that was traumatic,” he said. “I drove a truck and K-Loaders, sometimes under fire, sometimes in peace.”

Distel may not have been visibly wounded in action, but the invisible chemical compounds of Agent Orange invaded his body, doing irreparable damage on the inside.

“We loaded POLs, which was fuel in big bladders. Some of the bladders had Agent Orange on them, and we’d wipe our hands on our fatigues, turning them orange. We didn’t know any better,” Distel said.

While Distel and his fellow soldiers were risking their lives in Vietnam, they had no knowledge of the war protests and anti-soldier sentiment that was building back home. Instead of gratitude and support, returning soldiers were met with anger and rejection.

“We had no clue what was going on. We were in a war zone. We had no news,” Distel said.

Distel returned home bearing an Air Force Commendation Medal for outstanding service. Yet even his fellow veterans turned him away.

“When I got home, there was an American Legion around the corner. I walked in proud as hell and wanted to join, and they threw me out,” Distel said. “I couldn’t join the VFW. They didn’t want us. I couldn’t even get a job. They said we don’t want your kind here.”

Years later, when attitudes changed, Distel joined the American Legion to ensure no other soldier would be met with the same cruelties he endured.

“I didn’t want any other vet treated that way. It will never happen again,” he said.

Distel may have left Vietnam decades ago, but his service never ended. He lives to support veterans and “dignify their service.”

“I want to get them what they need and what they deserve,” Distel said. “The best thing you can do is thank a vet. They write a blank check, and that check includes their life.”