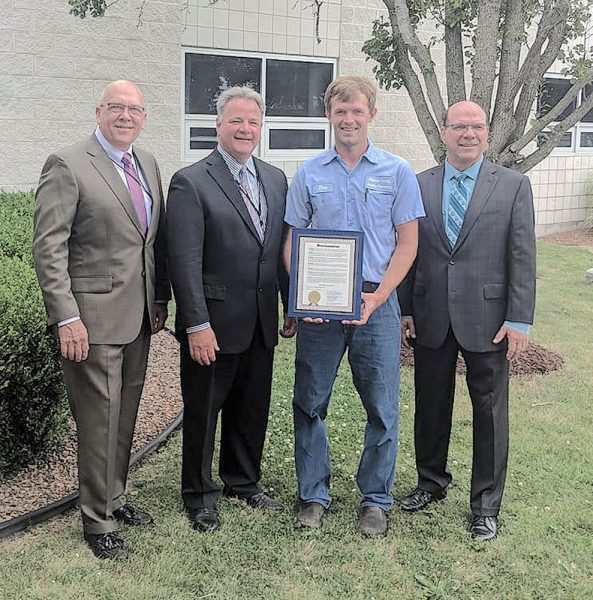 Jacob Wukie is presented a plaque proclaiming last Friday as Jacob Wukie Olympic Day by the Ottawa County Commissioners as the Olympic archer and local water plant worker heads to Tokyo, Japan this week for the Olympic Games.

With overwhelming approval from the Board of Ottawa County Commissioners, Water Operator Jacob Wukie at the Ottawa County Regional Water Treatment Plant in Port Clinton will be taking time off this week to shoot some arrows from his bow.

Commissioners Mark Stahl, Don Douglas and Mark Coppeler marked the occasion by proudly creating Jacob Wukie Olympic Day last Friday, honoring the Fremont sportsman for qualifying for his second trip to the Olympics, this time in Tokyo, Japan, starting on July 23. Wukie and his teammates won a silver medal in the men’s team competition in 2012 Summer Olympics in London, England.

Wukie, 35, is now heading to the Olympic Training Center in Chula Vista, Calif. this week, and then on to Tokyo with teammates, Brady Ellison and Jack Williams of the men’s archery team.

Juggling his faith and his family — wife Brianne and daughters Aria, Gemma and Caroline — and a full-time job at the Ottawa County Regional Water Treatment Plant, earning a spot on Team USA in 2016 fell short.

Wukie has been dedicating his off-time to archery practice this year, and he was on the winning squad competing in Olympic qualifiers on June 18-21 in Paris to earn berths for the premier competition with teams from France and Indonesia.

“Wukie has an amazing skill set, is a wonderful family man and a dedicated worker. Everyone in Ottawa County has to be so proud to support him in the Olympics,” said Commissioner Stahl, who said the honor of flying the Olympic flag at the Ottawa County Water Treatment Plant is certainly a local point of pride.

Wukie said his team was confident after practicing together for nine days before the Paris qualifying tournament, and they have been communicating well with one another heading into this year’s Olympic Games.

Wukie is an all-around outdoorsman. He is also a Lake Erie charter captain, and enjoys hunting, fishing, trapping, camping, hiking and spending time with friends and family. A native of Oak Harbor, he is the son of John and Patty Wukie, and his brothers are Jesse, Nathan and Wyatt.