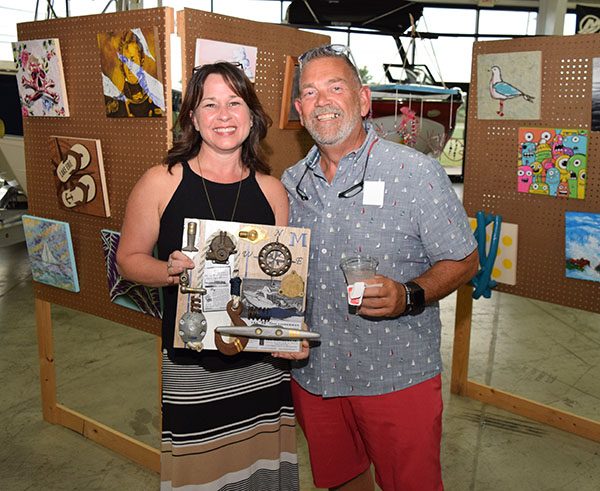 The first of 50 works of art at the Boats, Brushes & Beer gala held at SkipperBud’s by the Greater Port Clinton Area Arts Council that was claimed by showgoers was this painting, below, by Cora Talkington of Monroe, Mich., now owned by Katherine Rodgers. Port Clinton Safety Service Director selected a salute to the iconic Matthews Boat Company, upper right, created by Dina Rodgers, the owner of Lilly & Gert’s in Port Clinton. The event co-chairs, Josh Zetzer and Roberta Redfern, upper left, check out the many outstanding creations that found new walls to hang on at the popular party. 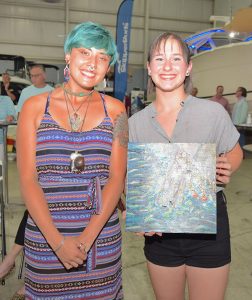 SkipperBud’s marine dealership in Marblehead featured glistening new boats, and a wealth of local artwork and paintings at the Boats, Brushes & Beer gala on Saturday night. The 50 showgoers who purchased premium tickets for the big party were allowed to select one of the original creations to take home.

It took the luck of the draw to be able to take a favorite pierce of art home, and Olen Martin was that lucky guy. Artist Dina Rodgers, the owner of Lilly & Gerts in downtown Port Clinton, asked the Port Clinton Safety Service Director which one of the 50 works of art was his favorite.

Martin, an avid boater who had a ticket allowing him to be the second to select a free painting, pointed to a collage representing the iconic Matthews Boat Company in Port Clinton. When he did, Martin was pleasantly surprised that it was Rodgers who produced the work of art. 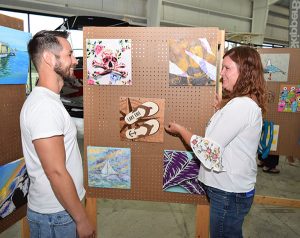 Roberta Redfern and Josh Zetzer were co-chairs of the event, with plenty of help from the many volunteers of the GPCAAC. Local DJ Al Sullivan and The B-Sides and Bella Burdella provided the entertainment.