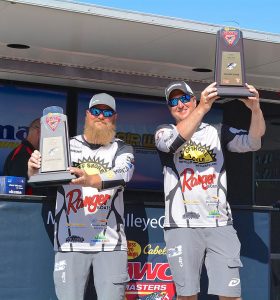 With walleye tournaments cancelled throughout the spring because of the COVID-19 pandemic, the top fishermen from the national Masters Walleye Circuit and the local Lake Erie Walleye Trail battled on Friday and Saturday on the fertile walleye waters off Lorain, Ohio.

MWC regulars Adam Hume of Oscoda, Mich., and Mike Karner of Greenbush, Mich., led from start to finish in the two-day tournament with a tremendous 10-fish limit of walleye that weighed 83 pounds, 13 ounces. They weighed 44-08 on the first day, and cruised to victory with 39-5 on Saturday to wrap up the victory, better than an 8-pound average.

LEWT anglers Chris Bradway of Alliance, Ohio and Kody Hill of Wellington, Ohio were more than 10 pounds behind, but had a healthy 5-pound margin over Ohio fishermen Brandall Gaines and Mark Wilmot (68-09) of Salem and Tallmadge, respectively.

Ohio tournament competitors were dominant in the field of 86 two-angler teams working the waters of Lake Erie. The top eight LEWT teams after second-place Hill and Bradway in the MWC standings were Ohio tournament fishermen: