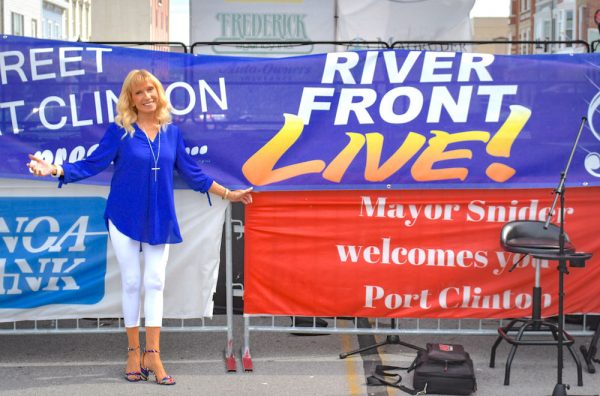 On any given Friday night in the summer, crowds gather near downtown’s Port Clinton Meals on Madison (M.O.M.) stage to enjoy live music by local talent. On Friday, July 15, the crowd was enthusiastic about “Port Clinton’s Calling Me!,” the city’s new theme song which hit the streets in early July.

The song was written and produced by local musician Ron Miller, and the video was filmed and directed by Shot by Shay. The Bert and Rachel Fall family star in the video, and a wealth of local attractions.

The Port Clinton Area Chamber of Commerce released the “Port Clinton’s Calling Me!” video and theme song to showcase the city. It highlights many of the city’s restaurants, shops and attractions, as well as local parks, the Port Clinton Lighthouse and the thriving arts community. The video touches on summer events such as M.O.M.

entertainment and the Walleye Festival, and it proves that winter on the lake can be just as fun with events like the Walleye Drop and the Burning Snowman Festival. 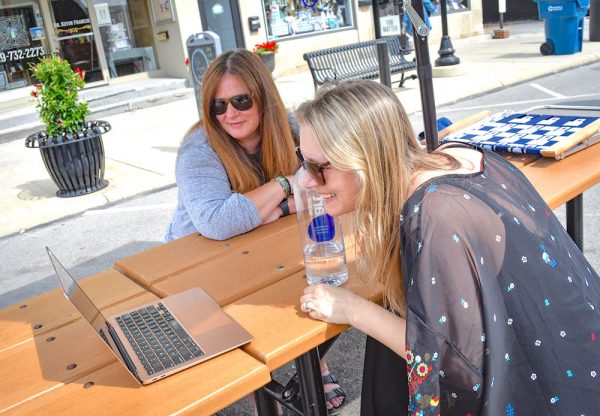 Sara Nelson, left, and Kira Jones watch “Port Clinton’s Calling Me,” a new video and theme song released by the Port Clinton Area Chamber of Commerce. Nelson said the video did a good job capturing Port Clinton’s identity as “a small town on a big lake.” (Photos by Sheri Trusty)

Locals became fast fans of “Port Clinton’s Calling Me!” and some of them were happy to share their thoughts while waiting for RiverFront Live! entertainment to start at M.O.M. on July 15.

Port Clinton native Sara Nelson said she was impressed with Miller’s depiction of the city.

Nelson said she isn’t the only person enjoying the video.

“It’s getting quite the buzz online. Lots of people are talking about it, and it’s all positive,” she said.

“My friends in Arizona thought Ohio was just cows and corn, but there is so much more than that here. When they visited me, they were shocked at how much Port Clinton has to offer. I took them to The Bait House and to McCarthy’s, and they were in awe,” Jones said. “The video captured Port Clinton well.” 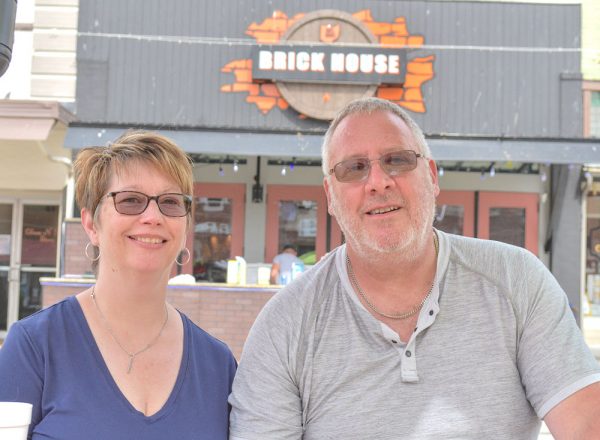 Jenny and Kent Coleman stopped by M.O.M. on July 15 to order food from The Brick House and enjoy the live outdoor entertainment. They said they recognized some of their favorite hotspots – including The Brick House – in the “Port Clinton’s Calling Me!” video. (Photos by Sheri Trusty)

Judi Halstead of Catawba is a local business owner, and she serves as emcee for RiverFront Live!, giving her a front-row seat to one of Port Clinton’s most popular music venues.

“I love the song. I think there was so much thought put into the writing and the creativity of the song. It is a perfect depiction of what Port Clinton has to offer,” Halstead said. “I also thought Bert and Rachel and the kids did a fantastic job.”

“We enjoyed the video a lot. We thought it did a nice job of highlighting some of our favorite things, which are definitely M.O.M., Slater’s, The Brick House and kayaking,” Jenny said.

Kent said the song has “a good, catchy tune.”

“I thought it was kind of cool. It covered a lot of everything here,” he said.

Although the song was designed to promote Port Clinton to tourists, it also gave locals an outsider’s view of life on the lake. It helped them remember that they are privileged to call Port Clinton home.

“My takeaway is what a nice place we have and how lucky we are,” Jenny said. “As locals, we lose sight of that.”